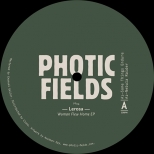 9.0
Facebook Twitter Google+
The Dublin-based Italian delivers a killer release that unites jak, Italo and electro. 'Some Things Endure' is a shimmering synth jam, Lerosa's melodies underpinned by a gurgling acid line and shuffling 808s. 'Nebula Raider' is more straightforward, as a jacking rhythm supports the swelling synths and 'Dream Of Flight' suggests a more stripped-back approach, led by a grungy bass and heavy claps. But Lerosa returns to his diverse approach on 'Postmodern', which rounds out this impressive EP by fusing electro bass and grinding funk shapes.

8.5
Facebook Twitter Google+
This Swedish producer has always had a different perspective to most of his peers, irrespective of whether he was delivering punishing tracks as Grovskopa or under his current, more nuanced Rivet guise. 'Crane Dance' is littered with such intricacies, with a creepy intro and eerie vocals littered amidst the stuttering groove. 'Driftwood' has deranged piano riffs, squelchy acid lines and sumptuous strings that fade in and out of the mix. Finally, ‘Line Of Moments’ shifts from stripped-back beats and a relaxed tempo into a wild acid coda.

8.0
Facebook Twitter Google+
Damon Vallero delivers a killer techno release that touches on broken beats ('Fragmental'); acidic workouts ('Fragments') and the raw tribal rhythms of 'Fragmentize' and 'Fragmented'. It's a pity that it's limited to a digital-only release.

8.5
Facebook Twitter Google+
Mosher may have taken the slow road to recognition, but 'Ready' proves that his approach was worthwhile. 'Encroachment' matches a churning Larry Heard- style bassline with breezy chords. In contrast, 'Get Ready' and 'Memory Flash' are tracky, bugged-out arrangements, with the former revolving around a repetitive vocal and the latter featuring tranced-out keys. Fred P, another late bloomer, works his magic to turn the title track into a deep, dreamy house groove.

7.0
Facebook Twitter Google+
A taster for Tobar's debut album, 'Love' shows that he does a neat line in Isolee-style brittle house rhythms and tranced-out melodies. However, with the exception of the uptempo, busy Low Jack remix, the remixes really make this package worth obtaining. D'Marc Cantu transforms the original with dramatic synth sweeps and niggling acid lines, while Samuel Kerridge delivers a version based on death march beats and an epic, orchestral climax.

8.0
Facebook Twitter Google+
Adding greatly to the electro revival is the re-emergence of Electrix. Fans of underground bass will fondly remember Billy Nasty's label from a decade ago, and thankfully its direction has not changed radically. 'This Life' leads with insistent bleeps, cold, metallic hats and a buzz-saw bass, while 'Night Scenes' marks out a deeper, more sinister sound. The Exaltics and ESC remixes turn 'Life' into a synth-heavy affair, but punishing subs are never too far away as Carl Finlow's take on 'Night Scenes' resonates to the sound of wobbly bass licks.

7.0
Facebook Twitter Google+
It sounds like Redshape is letting what remains of his hair down. 'Made Of Steel' sees the mysterious one in housey mode, with a kooky vocal chopped up over a pulsing backing. The 'Punked' version isn't quite as playful, but it does have the added bonus of a sinewy bassline and lithe breakbeats providing the backing for the swirling, building waves of synths that have become Redshape's signature.

8.0
Facebook Twitter Google+
The latest release on Creme Organization's offshoot label sees the unnamed producer dip once again into the rich source material that is early '90s rave and hardcore. 'Night Level 2' is populated by woozy synths and rasping breakbeats, while 'Romijn Ravine' prefers a more dramatic approach, as rave riffs sweep in over jagged rhythms. Still, the sense of wonder remains, audible on the track's breakdown and on 'Rebecca In The Hall'. There, an acid segue and a jacking rhythm lead the listener to a succession of breathy sequences that are as mushy as the warm after- glow of a virgin Mitsubishi.

9.0
Facebook Twitter Google+
It's been six years since the last Dopplereffekt record. In the meantime, Gerald Donald has been busy working on other projects and electro has re-emerged, but despite these developments, 'Tetrahymena' shows that no one can touch Dopplereffekt. The title track pits splurging black waves of bass against epic synth builds, both beautiful and ferocious. The white noise of 'Zygote' crackles and hisses in a manner reminiscent of the last Dopplereffekt album, but it can't compare to Donald bearing his soul, as he does on the razor-sharp drums and reflective melodies of 'Gene Silencing'.

8.5
Facebook Twitter Google+
As the title suggests, Indigo Area is putting out music that has been sitting on Kirk Degiorgio's shelf for over 20 years. Despite this time lag, the material hasn't aged; 'Exteriors' moves from moody synths into rippling eerie bass licks and 'The Factory' is based on stripped-back beats and a menacing low-end. The rest of the EP veers back towards this writer's favourite part of Degiorgio's back catalogue, with the brittle percussion and introspective mood of 'The Leading Edge' reminiscent of his best As One material. Kudos to the label for curating this release.
admin
Facebook Twitter WhatsApp

8.0
Facebook Twitter Google+
Sunil Sharpe's label impresses again with a hard-hitting release by Dualit. Channeling the sound of 'Game Form'-period Joey Beltram and the primal ghetto of Armani, 'Dualit' is raw, relentless and, thanks to a remix from Bleaching Agent, near essential.

'Nina at the Boiler Room'

8.5
Facebook Twitter Google+
TLR's label showcases another new talent on 'Nina'. The title track is laced with crashing snares and a tortured acid line, while 'No Stopping' and 'The Future' veer towards the label's deeper side courtesy of building chord sequences.

8.0
Facebook Twitter Google+
Loose, tropical-flavoured disco-not-disco from Munk released as a teaser to a forthcoming album. Remixes from Kolombo and Social Disco Club.
back to top
DJMAG
all sections