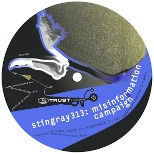 9.0
Facebook Twitter Google+
Stingray became known as Drexciya's tour DJ, but 'Campaign' confirms that he now inhabits a universe of his own making. Favouring pacy electro rhythms, the burning acid and sonar bleeps on 'Herd Instinct' and wildly discordant synths of 'Street Theatre' sound like the collapse of modern civilisation. There is some relief on 'Who's Watching The Watchers?', but the vocal claiming that "Spying on 30 million people, this wasn't part of my job description", is a reminder that electronic music can be a potent political force.
admin
Facebook Twitter WhatsApp

7.0
Facebook Twitter Google+
Dutch DJ Loud E brings the magic of his sets to vinyl. Every track here is a master-class in low-slung grooving, but the orchestral strings of the title track and the sassy brass of 'The USA Way' stand out.

7.0
Facebook Twitter Google+
The long-running Trelik takes on house influences. Based on a rolling, dubby groove, its billowing chords and repetitive vocal sound like classic tech house. 'Last Chance Saloon' is similar, but the drums are heavier and the groove more pumping.
back to top
DJMAG
all sections