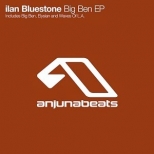 10
Facebook Twitter Google+
‘Big Ben’ doesn’t fit, with even the remotest comfort, into any of the known trance categories. The intro is spacey and atmospheric, but is too propellant and driving to be progressive trance. Note arrangements, sounds and FX varying from the melodic to the strident, all further brilliantly muddy the waters. With an anomalous, standout male choral vocal hung hauntingly in the mid-section’s background, all told this is inspired music making.

8.0
Facebook Twitter Google+
Having nothing discernibly ‘80s about it, ‘1983’ is instead low-key, low-tempo, but never less than listenable. Unlikely to tip many modern day trance floors into critical mass though, it’s largely the hor d'oeuvre for ‘Here and Now’. Vocalled idiosyncratically by Ben Heyworth, it glances at its navel more than once (we’ll forgive it), and is wonderfully, genuinely angsty and atmospheric.

7.5
Facebook Twitter Google+
With Armin apparently making more of a distinct division between his van Buuren output and Gaia material, you wonder if an album might be on the cards. ‘Empire of Hearts’ draws on strident, cylindrical synths for a sonically convincing opener. In the break it gets wicked with the pitch-bend, amping the atmosphere, and pulls off a conclusion that’ll send the faithful home with a smile.

7.5
Facebook Twitter Google+
A year on from the 'Original', Chris Metcalfe gives ‘Fiero’ a later night re-bake. True to his 138 form, style-wise there’s nothing to scare the horses here. Feisty tempo, a formidably deep drive to its vigorous bass, shimmery, chiming melodics in the run to the drop and a cliff-dive off the edge into glacial effects, and finally, a rip-roaring synth conclusion.

8.5
Facebook Twitter Google+
Australian producer Tygris has all the bases covered here. ‘Lyra’ largely represents a homecoming to Enhanced Progressive’s core sound, with lots of sifting, drifting melody and echoing vocal harmonics. It’s blown clean from the water by ‘Red Room’ though. Containing the most innovative production techniques of the month, its sounds and strings are bent, warped, delayed and detuned with endless ingenuity.

8.0
Facebook Twitter Google+
After ‘Phenomenology’ and ‘Fiber’, something altogether subtler and tougher to sub-pigeonhole from Jules. ‘Monte Carlo’ has a Balearic-ish feel, with warm pads overturing an electro-ish burr. Chopping and echoing a female harmonic over the top, when the more uplifting synth notes breach the break, they’re of a well-judged nature. Tonally, unlikely to bring a main stage to its knees, this nonetheless has the full ‘Monte’.

7.5
Facebook Twitter Google+
First single from Gareth’s ‘Drive’ album, which (allegedly) has at least one toe back inside the trance camp. Bryan Kearney’s mix is, of course, more of a chasm-ing leap in that direction. Playing off a full rendition of Bo Bruce’s polished, expensive-sounding vocals, he shadows them with lucent harmonics, echoing piano and, finally, sky-touching synth lines. W&amp;W’s mix hits much more of a big room feel, but some tough(er) trance moments also feature.
admin
Facebook Twitter WhatsApp

8.0
Facebook Twitter Google+
When Eximinds have their melodic/harmonic heads on, they rarely fall short of excellent. On ‘Freedom’ you could say much about the expert sequencing or precision production. It's that quiet storm of a riff that does the most damage though.

8.0
Facebook Twitter Google+
Las Salinas’ first vocal vehicle, and on this evidence you have to wonder why it's taken them so long. Deeply dug, yet progressively boomy in tone, Sue McLaren adds meditative lament with her best-yet vocal turn.

7.0
Facebook Twitter Google+
Rock-solid outing from one half of A&amp;N. In no rush at its front-end, ‘Vanishing Point’s all about heady trance-progressive. It gets nice and spacey in the middle, but you know there’s a big ‘gotcha’ of a synth line out there somewhere, waiting to pounce.

7.0
Facebook Twitter Google+
His first for AVA, this is another strong statement from Murphy. Super-loud drums, squalling synths and just the right amount of frazzled distortion preface a huge upswing at the end of the break.

8.0
Facebook Twitter Google+
Afraid’s catalogue may still be slender but it’s also perfectly formed. John Askew’s latest is a fraction cooler with its synthery than their norm, but that does nothing to dampen the label’s onwards/upwards march.

1. SUPER8 & TAB WITH JAYTECH 'Code Red' Anjunabeats "We teamed up with our label mate Jaytech and created this monster. It was great to work with such a talented producer like James, and our three-week tour throughout North America with him was the cherry on top of the cake! Release date is due from Anjunabeats in the following weeks." 2. ABOVE & BEYOND VS ARTY 'You Got To Believe' Anjunabeats "The 'Original' by Arty has been big for us for months and these vocals bring it to a whole new level. This is a guaranteed summer anthem!" 3. SUPER8 & TAB WITH JAYTECH 'No Frontiers' Anjunabeats "As played by Above &amp; Beyond on Group Therapy ABGT50 live from Alexandra Palace, London. We have been fine-tuning and road-testing this ever since and the reactions have been very promising. Expect a release date on Anjunabeats some time soon!" 4. RANK 1 vs DENNIS SHEPERD 'Freudenrausch' High Contrast "Rank 1 never fails and when you add Dennis Sheperd to the project, you know you have a winner! This will stay on our playlist for a long time." 5. Andrew Bayer 'Once Lydian' Anjunabeats "This is the recent solo release from the hottest man on Anjunabeats! It perfectly combines all current genres from trance to tech house to big room. Works every time we play this in a set." 6. Above & Beyond 'Hello' Anjunabeats "The latest release from our label bosses. The breakdown is so beautiful and you can see how the dancefloor melts to those chords… another classic is born!" 7. Jaytech 'Megastructure' Anjunabeats "Jaytech returns with yet another great tune! Throughout the Code Red Tour, we saw this track do damage in every city!" 8. MARCUS SCHOSSOW VS DEPECHE MODE 'Personal Reverie (Matt Davey Mash-up)' White "We have been dropping this at every gig since we got this gem. This is pure gold!" 9. JUSTIN OH FEAT JONNY ROSE 'City Lights' Silk Music "Justin has been one of our favourite producers in recent years! This track shows you why." 10. Joonas Hahmo 'Bong' Armada "Our fellow countryman released this big track on Armada and we can expect it to be huge during festival season. Every A-list trance DJ has given it early support."
back to top
DJMAG
all sections