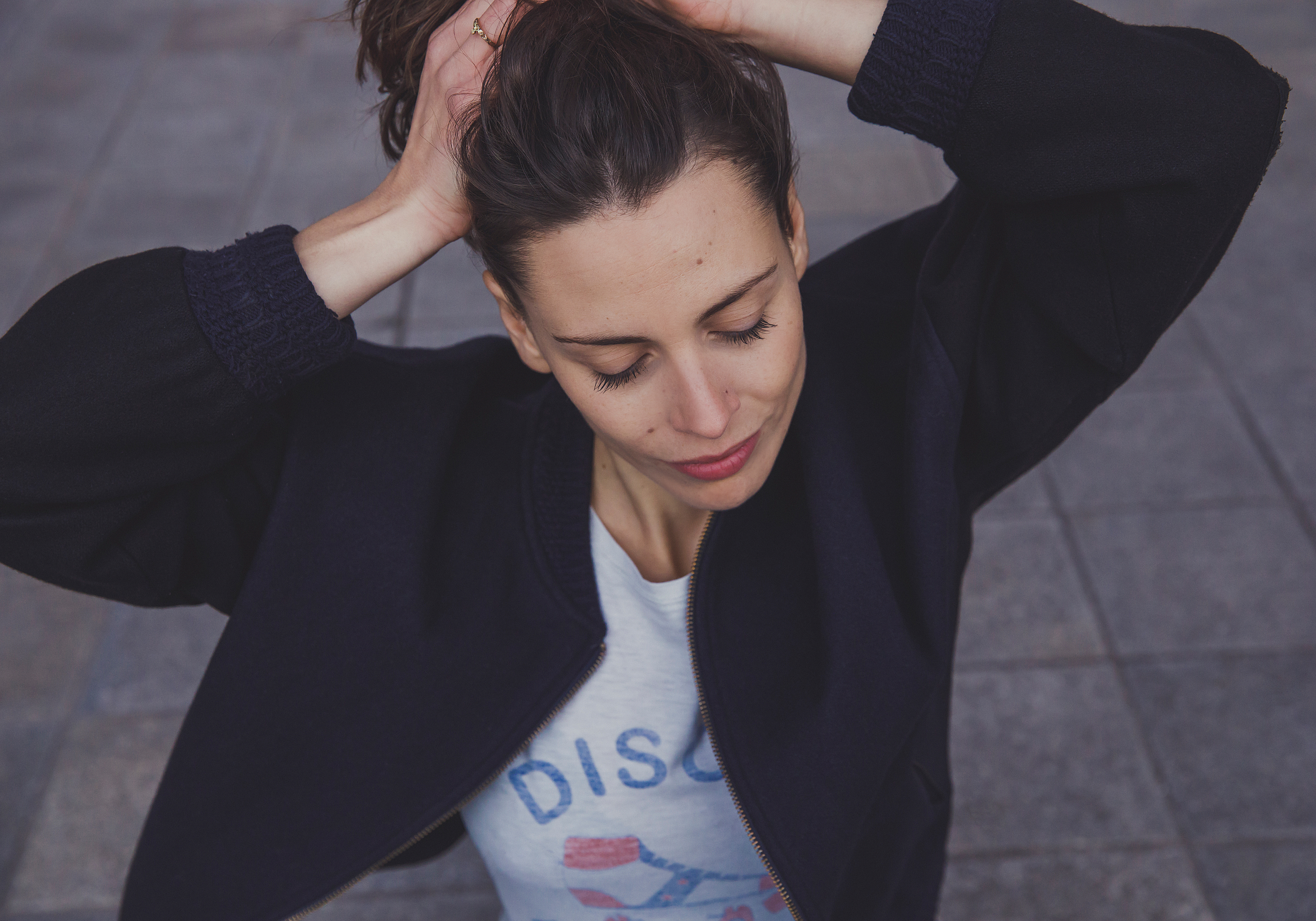 9.5
Facebook Twitter Google+
Truly blazing work from Paris's Marina Trench here on Wolf Music, four tracks running the gamut from peak-time bangers to dawn-break anthems. Title track 'Waterside', with its slinky bass and hushed vocal longing, is very much in the former camp, a floor-filler par excellence. 'Get In' bursts with grand piano chords under a relentless loop, while 'Train Call' also goes all-in on the cut and paste keys. The emotive 'Straight' is heavy on the feels, built for Balearic (or Adriatic) bliss. Superb.

7.0
Facebook Twitter Google+
There’s a beautiful directness in both the drums and the title of Significant Other’s EP closer for Oscilla Sound: ‘Drum Therapy’. Rather than punching a kick hard and having it suck the air out of the chamber, he’s happier to dot them out in triplicate, and it really serves to up the groove’s intensity. The rest of the tracks roll at a slower techno pace, but they capture a sense of discombobulation particularly well.

6.0
Facebook Twitter Google+
My raging internal debate about whether leftfield techno can actually be classified as bass music be damned… Cabasa’s latest three-tracker for the Boogie Box label echoes a lot of the sweeping, pad led music I’ve loved in the past; but it’s definitely created with a more techno audience in mind. ‘Cats On Scooters’ is a case in point: the kind of mesmeric melodic twinkles that could lure a mix into security, before a rock hard drop.

7.0
Facebook Twitter Google+
Today I was half-listening to some card harping on LBC about the “true cost of Big Ben ringing out the announcement of Brexit”, and then the first thing I played when the conversation inevitably got too much for me was ‘The River Is Tight’ from Logic1000’s taut new EP on the Sumac label — which itself features a looped bong ringing out a clear death knell for polite society. Egregious happenstance perhaps?

6.5
Facebook Twitter Google+
In exploring the realms of dancehall and bashment drums through a dubstep-focused lens, the Glasgow producer Casement could actually carve out a bit of a micro-niche for himself. I mean, switching up drum patterns is one of the easiest ways to [re]ignite an audience, and there’s enough space in a track like ‘Cables’ for something harder, grimier or more hypercolour to rocket right out of it. All three of these cuts are bolshy.

8.0
Facebook Twitter Google+
You know how a lot of talky-talky music people like to note that some of the best things in club music come from the points where ideas and styles crossover each other? Yeah? Well Elles' ‘Gotchu’ is a wonderful example of exactly that. Indebted to two-step garage swing as much as it is the drunken drum work of Livity techno, it sprawls out into a bruk roller with superbly unique poise.

8.0
Facebook Twitter Google+
If you ever go a little while without listening to any of Trim’s flows, when you come back to them, they always seem so punchy, so boastful, yet so refined and defined. So when ‘That Wasn’t It’ found its way onto fabric’s new compilation (which celebrates 20 years in the game), I was happy and proud, considering that Pinch’s squeaky drum line matches the tone of Trim’s tongue-in-cheek flow perfectly.

8.0
Facebook Twitter Google+
'The Flash' is a new split release from DJ Lostboi & Torus where the — somewhat ambient — music is inspired by the same solar phenom (the sun creating a green light burst on the horizon). Completely beatless, the eight tracks sweep and swell across all kinds of chunky sonic textures that are pretty hard to accurately summarise over some 70-something words. Found sounds, heavily gated arpeggios and lashings of reverb abound throughout.
Felicity Martin
Facebook Twitter WhatsApp

7.0
Facebook Twitter Google+
Wiley’s rate work of late has been mad, and between all the warring and shooting videos it's impressive that he’s been able to knock out singles, too. ‘Mazza’ isn’t him at his best, but it’s a solid bit of trap-leaning grime.

'Cause A Commotion (ft. Skip Marley)'

7.0
Facebook Twitter Google+
Journeying to Jamaica to tap up Bob Marley’s grandson on the feature, Bugzy opts for a light, Afrobeats-style beat with plenty of feelgood flava.

8.0
Facebook Twitter Google+
Sterling work as ever from Jay Tripwire, with this muscular jam for the rapidly-becoming-essential Moteur Ville Musique. Highly recommened.

8.0
Facebook Twitter Google+
If the fact that both Khruangbin and Thundercat have new albums about to drop hasn't tantalised you enough, here's Knxwledge's first transmission from his as-yet untitled new album, set to drop late spring. A gorgeous, jazzy, funky cut conjured from rippling piano lines and tremulous soft-touch drums, it's a 'taster' that leaves your pupils dilated and hungry for more.

'Neva Give A Front '

8.0
Facebook Twitter Google+
Camoflage Monk's latest collaboration is with Pro Zay on 'Slump 2': 28 minutes of madness that, like all the best UK and US rap at the moment, sounds like it's been fed a shitload of heavy, heavy barbiturates and THC-packed weed. Blissful baleful brilliance.

7.0
Facebook Twitter Google+
Hey, I miss ATCQ. You miss ATCQ. Luckily, these days, every month seems to bring a new single that sounds a fuck ton like ATCQ — this month, this natty little banger from Illajide (yup the guy from the similarly Tribe-obsessed Clear Soul Forces) which bounces and glides and brings summer a few months early. Get on it.

8.5
Facebook Twitter Google+
The first leak from The Heliocentrics’ new album is as gloriously mudded and dusty as you’d ever want it to be.

8.0
Facebook Twitter Google+
Undulating deepness from Underground Quality's main man Jus-Ed. Various versions of 'The Drift' appear on this first release of 2020, each more unctuous than the last.

8.5
Facebook Twitter Google+
Fans of sprawling, emotive house are strongly advised to seek out Blutch's latest. The title track is arpeggiated perfection, while there's a version from some dude called Michael Mayer too.

7.0
Facebook Twitter Google+
Dundov seeks the deeper melodies on his rework of the new Glenn Morrison single, retaining the hook of the original while pitching down its progressive trance energies somewhat. There’s some nice, lush detail in his soundscapes, plus a killer rolling bassline.

7.0
Facebook Twitter Google+
Progressive legend Grum launches his Deep State imprint in early 2020, labelled as a home for passionate upcoming producers. Its debut release from Kane is a straightforward offering that’s very much in the key of Prydz or Kappa, though hopefully a sign of exciting things to come.

7.0
Facebook Twitter Google+
Can’t really go wrong with Harry Shotta and double trouble label heads on Souped Up can you? A subtle and beautifully understated track to really let Shotta’s bars be heard, and we love the xylophone touches. For us, the vocal mix is designed for headphones, and the dub for the dance.

7.5
Facebook Twitter Google+
This track strikes an interesting balance that we can’t put our fingers on — is it cool and funky, or creepy and menacing? We just can’t tell. It is, however, a robotic-sounding stepper with intoxicatingly glitchy drums and a wicked halftime breakdown.

9.0
Facebook Twitter Google+
Superb coldwave revival from Berlin-based Dame Bonnet, capturing the mood of that distant, European DIY sound of the early '80s. One for the fans of France’s Excès Nocturne or UK heroes Oppenheimer Analysis.

9.0
Facebook Twitter Google+
Wicked disco pop from the brilliant Roisin Murphy, co-written with Sheffield legend DJ Parrot, who provides the remix on the flip under his Crooked Man guise.

7.5
Facebook Twitter Google+
Yulia’s deep and joyous, grooving original is treated to a pair of remixes: Farid Odilbekov strips it deep and tougher, while August Artier gives it an energy boost.

8.0
Facebook Twitter Google+
Hardt Antoine’s style on this EP isn’t centred on a sub genre; instead, he melds colourful ideas in and around house with electro and techy rhythms.

9.0
Facebook Twitter Google+
Big room styles rarely feature on this page, but this one bangs from Miami-based Ucros. Doof doof.

8.5
Facebook Twitter Google+
Serene soundscapes blossom into deep orchestral bliss. Lay back and melt into your sofa listening to this. Afterparty gold.

7.5
Facebook Twitter Google+
Swathes of low-end energy are driven home via a smacking 808 kick. The bleepy lead line will rip your head off in the dance.

'A Separation Of Being'

'A Dozen Things To Do In Limbo'

9.0
Facebook Twitter Google+
An “audio postcard” from Bristol’s adventurous producers, this is surprisingly rich and essential background research for what goes on behind the beats.

7.5
Facebook Twitter Google+
‘Trinity’ heralds a meeting of the new (Asteroid), the not so new (Vlind) and the debutante (Gary Leroy). The result’s a lively, upliftingly effective trancer with psy asides and some true trance grit.

7.5
Facebook Twitter Google+
Twenty-nineteen was the year Garuda wiggled its toes back into the trance pond. December’s ‘Out Of Sight’ from Solis & Sean Truby was impressive fare, and here, Eximinds (seemingly ditching the last of their trouse affectations) lend the label a persuasively energetic firestarter.

8.0
Facebook Twitter Google+
This is a fine follow up to 2018’s ‘New World Order’. A barrage of primal, jacking workouts — including the title track’s panning vocal samples — followed by the acid-flecked electro of ‘Ghetto Love’ ensure all ears are on User Engine.

7.5
Facebook Twitter Google+
Kontrapunk delivers a diverse compilation that veers in sound from Doc Sleep’s tough tribal techno to the atmospheric downtempo work of Humanoid. The standout track, however, is the Legowelt-style synths of Carmel & Nikita’s ‘Nebenan’.

8.0
Facebook Twitter Google+
Kronos exploded onto the scene with a lot of hype quite a few years ago now, and his continued high quality production output justifies why we were all so excited. This latest offering on Scantraxx’s harder label is one of his best tracks to date. Brutal beats getting support from all the big players.

7.5
Facebook Twitter Google+
This legendary UK hardcore techno DJ is back with another EP. 'Murdered Out' is 180BPM of chunky, fun, yet aggressive beats. Never directly following the European trends of hardcore, this release is a modern-sounding track that still contains the essence of the underground UK scene from which Dolphin emerged.

8.5
Facebook Twitter Google+
One of the founding fathers of the hardstyle scene is back again with another track that pays tribute to the early sounds which he helped create, but with a fresh new twist, making it perfectly relevant in the most cutting-edge, upfront sets.
1. Kez YM 'Cross Section' Faces Records "This is my first LP, released early 2019." 2. Various Artists 'Fly Family Vol. 1' City Fly "Wicked compilation album from Leicester label, City Fly." 3. Pablo Valentino 'Space Tribe' Eureka! "This includes a collabo with me and the mighty Simbad." 4. Theo Parrish, Lori, Silentjay, Perrin Moss, Simon Mavin & Paul Bender 'What You Gonna Ask For' Sound Signature "A great track from my fave artist and my fave label." 5. Moodymann 'Sinner' KDJ "Another fave. Dope and sweet, as always." 6. Takaya 'Street Edit Vol. 1' The Groove Stage "Some fine edits here from the Japanese producer." 7. Jank 'Jank EP' Mysterious Works "This is another cat from Japan. Dope EP." 8. The Vision/The Dangerfeel Newbies 'Edits By Mr K' Defected "Some useful edits by Mr Danny Krivit." 9. D'Angelo 'Black Messiah' RCA "One of my faves from the 2010s." 10. Kirinji 'Cherish' Universal "A great J-Pop band. Modern city pop from 2019."
back to top
DJMAG
all sections