A book of 2Pac’s childhood poetry and illustrations is currently up for auction via Sotheby's.

The booklet, which was written and illustrated by an 11-year-old Tupac Shakur aka 2Pac, contains a selection of haikus as well as a self-portrait. It's estimated to sell for around $200,000-$300,000. Check out a photo of the manuscript below.

Included in the booklet is a self-portrait of Shakur sleeping with a pen in hand, which he titled 'Shakur, Future Freedom Fighter'. He gave the booklet to his godfather – Black Panther activist Jamal Joseph – 40 years ago, while Joseph was in Leavenworth Prison. Shakur's late mother, Afeni Shakur, was a prominent member of the Black Panther party.

The 2Pac manuscript is part of Sotheby's The Art and Influence of Hip Hop sale, which opened last Thursday (24th March) and is also auctioning off Chuck D’s original ‘Tour-Worn’ silver Raiders Starter jacket, among other items.

Last year, it was reported that a rare collection of Tupac Shakur photos are to be sold as NFTs. The never-before-published images were taken in the midst of a release party for the legendary rapper's landmark debut album, '2Pacalypse Now', in 1992. 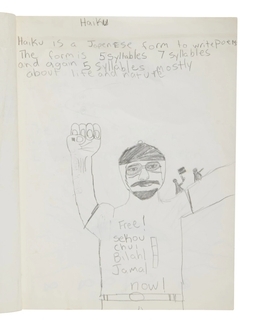 Rare collection of Tupac photos to be sold as NFTs