Armin van Buuren and DJ EZ have been announced as headliners for South West Four festival's 2018 event in London.

The long-standing festival, which is set to celebrate 15 years in operation in 2018, will host Armin van Buuren on its indoor main stage on Saturday 25th August, followed by DJ EZ on Sunday 26th August.

Other confirmed headliners for 2018 include Marshmello and Chase & Status, alongside appearances from Dizzee Rascal, Craig David, Jonas Blue, Sigma and Stefflon Don.

Amassing a huge back-catalogue of former headliners, including Faithless, Skrillex, The Chemical Brothers, deadmau5, Pendulum (Live), Rudimental, Eric Prydz and Above & Beyond, South West Four started as a backyard party in June 2001 and rapidly grew in number over the next couple of years, moving to Clapham Common in August 2004.

The festival is renowned for boasting a number of carefully curated stage hosts which include brands like Amnesia, ANTS, Playaz, and Fatboy Slim’s Smile High Club, plus more recent collaborations with B. Traits, Disciples and Danny Howard.

Watch back the stunning SW4's 2017 aftermovie below for a preview of the action and check out the flyer below featuring Armin and EZ, plus sign on for Early Bird tickets via the South West Four website here. 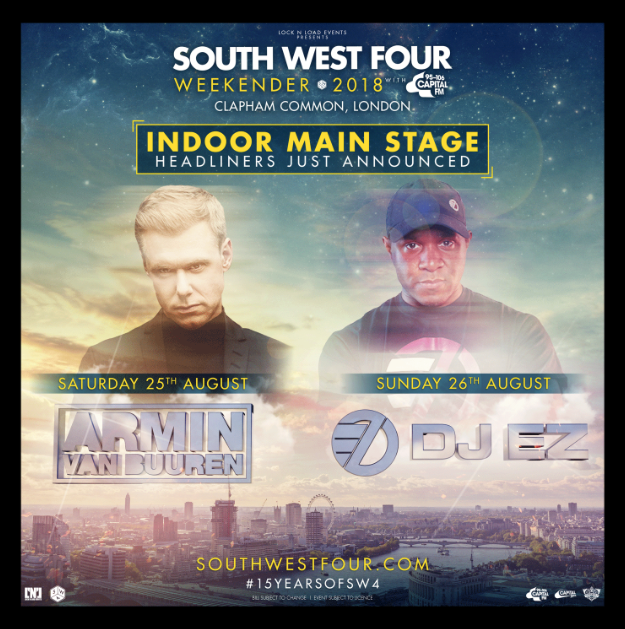