Björk has revealed the artwork and confirmed a release date for her highly anticipated new album, 'Fossora', which will land on 30th September. The first single, 'Atopos', is due out soon.

The forthcoming record features a cover shot by photographer Vidar Logi, which you can see below. In a statement about the music itself, the multi-award-winning artist explained her latest outing explores "bass" and "heavy bottom-end" sounds, and deals with ideas of grounding, and our shared global experience of the pandemic.

"7 billion of us did it together/nesting in our homes, quarantining/being long enough in one place that we shot down roots," Björk wrote, explaining the title is a "word I made up. It is the feminine of fossore (digger, delver, ditcher). So in short it means 'she who digs' (into the ground).

"Each album always starts with a feeling that I try to shape into sound," she continued. "This time around the feeling was landing (after my last album 'Utopia' which was all island in the clouds element air and no bass) on the Earth and digging my feet into the ground."

In addition to 'Fossora', Björk also has a new podcast series, 'Björk: Sonic Symbolism', which explores her discography, and the meanings and thoughts behind the individual LPs. The first three episodes — respectively looking at 'Debut', 'Post', and 'Homogenic' — were made available today, 1st September. You can find them here. 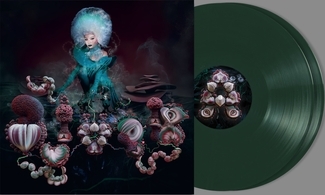