Body Movements has announced the collectives and stages taking part in the summer 2022 festival, which will take place across Hackney Wick, London, on 30th July.

Launched last year by producer and DJ Saoirse Ryan and Clayton Wright of LGBTQI+ collective Little Gay Brother, the day-night event is focused on "celebrating the full-spectrum of queer club culture" over 16 indoor and outdoor venues.

"Year one showed us queer utopias exist. Year two is about making even more noise to celebrate the diverse talent and people that make this clubbing community so exciting and important," said Wright.

"In year one, Body Movements captivated the stunning beauty and importance of the queer grass-roots movement taking up space, a melting pot of sounds, cultures, identities, dancers, looks and power,” added Saoirse.

Ahead of the main event, a series of workshops and panels will take place, with the aim of supporting the festival and amplifying the community at its core. Details on this aspect are still to be announced, with the full festival line-up also waiting to be unveiled. Ticket pre-registration is open, with pre-sale on 2nd March at 10AM UK time, and general sale the following day.

Revisit DJ Mag's report from the first edition of Body Movements, which was held in October 2021 and sold out in 48-hours of tickets being released. Listen back to Saoirse's track choices for her Selections feature. 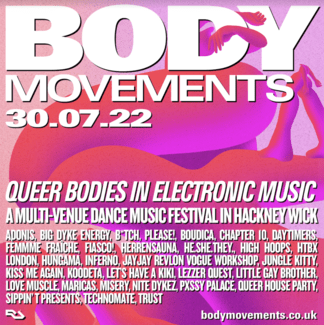