New York’s finest, The Martinez Brothers, Steve and Chris, have spent their summers being based in Ibiza for the past six years or so. They’ve made CircoLoco on Mondays at DC10 their home from home and the island has given them a great big lovely group hug in return. DJ Mag speaks with the duo just a few days after they have (not fully) recovered from playing one of their legendary, feel-good sets at Amnesia. “It was amazing. We’re still there,” says Steve. “We were so nervous. And the afterparty, that was bonkers too. We played back to back with Marco Carola,” Chris goes on to say.

When Pete Tong introduced their ‘Sound Of Ibiza Mix’, aired on the same night, he couldn’t have put it better, “sit back and enjoy the energy, the madness, the sound of The Martinez Brothers”. Because there’s an infectious quality about them, almost an aura that simply sucks you in. We want to party with them, we want to hang out with them, we want to dance and groove to their particular house infusions and party-fun times. It’s not just about music with these guys though; fashion and art play a massive part in their get up and get go. “Yeah definitely, you’ve got to stay fresh,” Chris tells us. This year they’re upping their game with a second drop hat and jacket release for New Era, inspired by a long list of designers from Givenchy to Gosha to Palace. And earlier in the summer at Sonar they debuted a collage of their art as a visual show during their performance there; which is something the pair are working to expand on for future gigs.

What with their own label Cuttin Headz busting out awesome alternations of soulful house and techy wonderments, with tunes and EPs from cool artists they respect and have worked with along the way, there’s also Seth Troxler’s Tuskegee imprint that they’re collaborating and honing in on. And with so much going on it’s hard to know where to start... 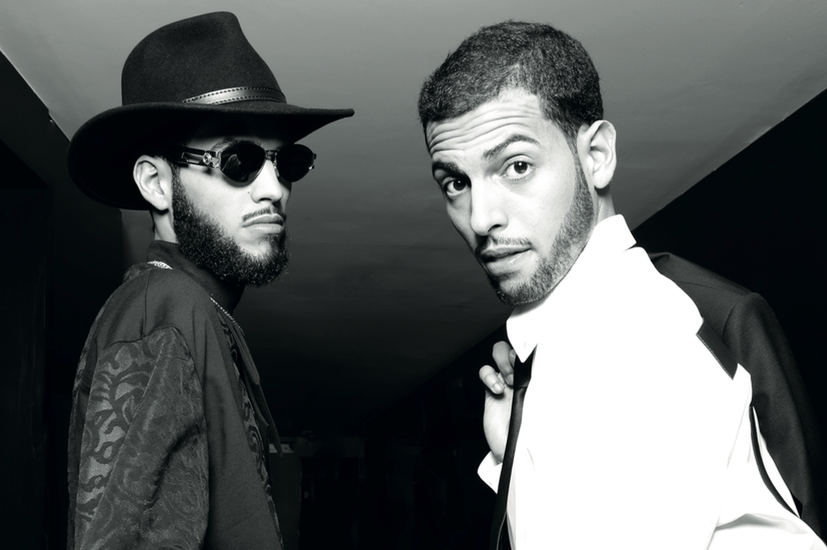 We’ve been hearing about some of the great collaborations that you’re working on at the moment, maybe you’re going back to your roots a bit more?
Steve: “After the season’s over we’re going to go for a week to Martin Buttrich’s house in Barcelona. He has a crazy studio out there, so we are going to test some tunes there. And Tiga, he actually has a track that he’s writing now. And this week we’re in the studio with our boy Louie Vega, the legend. He’s in our house right now. After this we’re going to go back to the studio to work with him.”

That sounds like it will be wicked! So are you going to work on some new material with Louie Vega?
Chris: “Yep. Tunes.”
Steve: “We’re making whole tracks. Maybe work on a house beat today. We’re not really planning anything. We’re just going with the flow.”

We also heard that you’re doing an MF Doom mixtape...
Chris: “Yeah, that’s also in the works as well. That’s a big one, that’s coming through before the end of the year.”
Steve: “That’s going to be more of a thing before the album comes out. It’s like an appetiser before the dinner, you know what I’m sayin? We’re going to have a mixtape come out before our album comes out. Either the start of the year or the middle of next year.”

So an album is still on the cards at some point then?
Chris: “Absolutely, next year for sure. That you have to take your time with. You can’t rush that. It has to come all organically.”

Would you be bringing together stuff that you’ve worked on over the past 10 years, or is it something that’s happening now from scratch?
Chris: “It’s pretty much now really. You don’t want to hear the stuff I was making 10 years ago (laughs).”
Steve: “But you know what, there is some stuff that we worked on 10 years or so back that we have in the vaults, like stuff with Nile Rodgers. We have a lot of stuff that we haven’t let out yet, there might be a few things. But as far as the album goes it’s all now. It’s time for now. It’s going to be all now.”

You guys are also known for playing percussion and drums, bringing an organic sound into the process...
Chris: “Yeah, we were in the studio with King Britt, doing loads of live stuff, like jazz, hypnotic type joints, it was crazy. We’re trying to do a bit of everything but we’ll see how it fits in the end.”

It’s exciting that you have so many influences and styles that you can bring together...
Steve: “Our background is in everything, it’s not just in house music. House music came later.”

We love the fact that you’re working and have worked with some real legends and mentors of the scene...
Chris: “Yeah man, and we have Louie Vega in our house right now! If you’d have told me that 10 years ago, that he’s going to be chilling in my crib, I wouldn’t have known what to tell you. It’s a dream come true literally, he’s a guy that I look up to, if it wasn’t for people like him we probably wouldn’t be sitting here now. So we’re super thankful for that. Especially this guy, I used to listen to all his mixes. It’s crazy.”

Could you tell us a bit about stuff that you’ve got coming up on your label Cuttin Headz?
Steve: “We’ve got a Luke Solomon EP dropping this month. We have a sampler coming out of different tracks with Mathew Jonson. And we have Andrea Oliva coming out with that crazy track ‘Vermona’, with a Steve Rachmad remix on it. We’re backed up, we actually have a lot of joints we have to put out.”

And what about Tuskegee, the label you’re working on with Seth Troxler, how are things going with that and can you explain a bit more about the thinking behind it?
Steve: “Tuskegee is Seth’s project, it’s about getting our friends together and doing dope things. Make dope music, put on cool parties.”
Chris: “Spread our culture.”
Steve: “We’re all from an urban place. We want to remind people not to forget about that, because at the end of the day that’s where this culture was born, from our urban areas. But I can only speak for New York, and Seth is from Detroit.”

What have you got coming up on the label?
Chris: “We got loads of joints, but we’re just trying to figure out what we want to put out first. We’ve also got a collaborative album that’s going to be sick, it’s going to be crazy. So there’s a lot of stuff in the pipeline.”
Steve: “That album is an album that Phil Moffa is also doing. And Dice has got some tracks that he wants to put out. Mathew Jonson. We have all these things in the pipeline, but the summer has just gone crazy. We’re taking time off in November just to get everything sorted.”

Is that how it works for you, like a seasonal thing?
Chris: “Slightly, we almost get a little bit over ambitious, that we’re going to do all these things in the summer in Ibiza. We brought all our equipment out here and everything and it’s just like, between the touring and getting to Ibiza, sometimes not as many things get done as we would like.”
Steve: “But we have a good team that helps us out as well, if it wasn’t for them it would be more insane. But it’s good, everything’s going smoothly. It’s awesome, it’s good to have a lot of stuff going on for sure.”

You must be really nice to work with because you’re often doing a lot of back-to-backs and collaborations, and that can be a hard thing to do as well, it’s not always that easy to do...
Chris: “Back to backs are always fun, especially when they’re with people that you admire musically and you’ve figured out that you hit it off when you’re playing. It makes you better at the end of the day. It’s like friendly competition, kind of. Even with me and my brother when we play together, he’s trying to one up on me and I’m trying to one up on him. That’s what makes for a good party, ‘cause it’s all fun and games.”

We’re loving the edit you’ve done of Heaven 17’s ‘Play To Win’. Was that just for your Pete Tong mix or is it something you might be releasing?
Steve: “We actually made it just for us to play out. But this edit seems to be getting a lot of attention and a lot of our friends really love it as well. I think we’re going to have to try to put it out somehow.”

How do you decide on the gigs that you’re going to do, because you’re obviously in demand and you’ve got a really nice reputation around you...
Steve: “We always have little meetings beforehand, talk about gigs coming through and whether we want to do them, with our agents or whatever. At this point we just want to do dope parties, play gigs that we know we’re going to have fun with and that are going to be inspiring. There’s nothing worse than going to a gig and being miserable. So for the most part we just want to play fun gigs and play cool parties.”

How do you fit your DJing in with producing and making music? Are you good at working on the hop?
Steve: “I’m not really as much, my brother is a little bit better. I wouldn’t say it’s our strong suit, working on the road.”
Chris: “It depends on what equipment you have and what headphones you have. Sometimes the headphones can be a bit irritating when you’re working on the road. There’s a lot of different factors. There’s a few gadgets that are coming out, Roland and stuff like that. They’re going to make it really easy to produce on the road. Watch out for the 909!”

You’re playing our party with The Rainbow Venues in Birmingham on 8th October alongside Chris Liebing and Jamie Jones. Can we talk about the house to techno dynamics?
Chris: “That’s going to be sick.”
Steve: “It’s all the same thing, it’s going to work because we’re all friends. We’re just all going to have a blast and hang out. Just play records, whether it’s techno or house, whatever it is, we’re just going to have a good time, celebrating that anniversary. It’s going to be dope.”
Chris: “We’ve played with Jamie Jones a bunch of times, but never with Chris, but that’s a homie right there.”

And of course it’s DJMag’s 25th anniversary...
Chris: “Yeah, that’s major, that’s sick. Congrats.”
Steve: “Man we were always fans of the magazine.”
Chris: “Dying to be on it. We would always pick them up wherever we could. It’s standard, we still do.”

Hey, thanks guys. And this issue is also the Amsterdam Dance Event issue, are you playing there, and what are your thoughts on that actual event?
Chris: “We’re doing a party with Dice and the whole HYTE crew, and CircoLoco, and another one that you can’t quote me on yet.”
Steve: “It’s cool man, it’s just dope. Meeting up with friends, having a party. We have a lot of friends out there, we go there to see our friends. And it’s one of my favourite cities as well.”

Well thanks very much for your time...
Chris: “Ah cheers. 25 years, that’s incredible.”