The legendary UK DJ will take over the OVO Arena Wembley on Saturday 17th September, the day after the release of his new album, ‘Electronic Generations’, his first in over a decade. Pre-sale tickets go on sale on 22nd June, and you can sign up for priority access here.

Speaking about the show, Coxy said: “This has been in the planning for a few years. I felt like it was a good opportunity to show the world I can do a live electronic showcase moving from a DJ to a live electronic artist. And it gives me the chance to showcase the album in its entirety.”

“I’ve never done this kind of show before, so it really is a first for me. All my live shows so far have been hybrid live/DJ sets. With Wembley this will be a full live electronic show where anything could go wrong at any time. It’s a big deal for me, but the butterflies are a good thing! This is going to be something special and something you’ve never seen from me before. I’m not just a DJ anymore – being a live artist is something else entirely.” 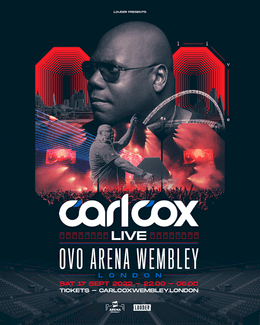