Underground4Ukraine, a new fundraising initiative to support Ukraine in the wake of the Russian invasion, has launched to 'unite the underground against war'.

Various European clubs, venues, promoters, artists, and labels have already joined the network, with Amsterdam's Alter Ego and IsBurning, Lisbon's Carpet & Snares, and Brussels' Hangar among the names who have signed up so far.

"In the midst of every chaos, there is opportunity. For kindness, for solidarity, for kinship," say Underground4Ukraine. "Art isn’t made to decorate apartments, but to move, to propel, to create new realities."

A number of Brussels-based event organisers are hosting an open-air festival tomorrow (10th March) at Brussels' Atomium, with sets from Belgian DJs and with all proceeds going to Underground4Ukraine. Pick up tickets here and check out the flyer below.

The international music community has come together in various ways to offer support for Ukraine following Russia's invasion of the country on 24th February.

Ukrainian label Muscut and its sub label Shukai are both donating 100% of revenue spent on their Bandcamp pages to the Savelife organisation. Ukrainian label ШЩЦ is donating 200% of its profits to Kyiv Civil Defence. 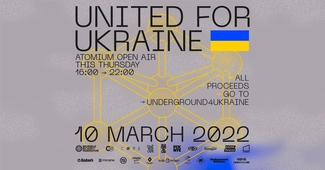