The Deptford Queer Soundsystem Day party has been announced for later this month, with the free event set to take place in the grounds of The Shipwright's House on Sunday 29th May.

Adonis' Gideon (pictured), also part of NYC Downlow and R3 soundsystem, is heavily involved too as curator and Guest Creative Director of Music at London Borough of Culture, which is partnering on the event. “I grew up in south London, and free sound systems in London parks were the highlights of my summers. I’m excited to update this phenomena for 2022 with DQSD," he said.

Venue wise, the Master Shipwright's House is the oldest remaining building from the Royal Naval Dockyard at Deptford, and dates back to 1513. Remodelled in the 18th Century, the address boasts a large garden area, which is where May's event will run from midday to 6PM. 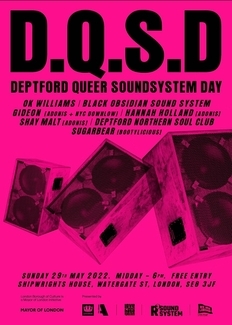