DJ Mag returns to Miami this year for its annual pool party as part of Miami Music Week.

Following on from last year's event, which welcomed the likes of ANTS boss Andrea Oliva, Dennis Ferrer and HoneyLuv, the next flagship party will take place at the Sagamore Hotel as part of the Epic Pool Parties series, which lasts from 22nd to 26th March. As well as hosting the opening party, DJ Mag will be presenting the parties at the venue throughout the week.

The full line-up for the series, including DJ Mag’s own party on 22nd March, will be announced soon, but the first hosts have been announced in the form of global house mainstays Defected on Thursday 23rd March, and Nick Warren's The Soundgarden on Friday 24th March.

Check out some of the streams from DJ Mag's 2022 pool party with John Summit, Melé, Layla Benitez and QRTR. 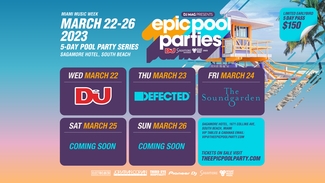