Field Maneuvers has unveiled the full line-up and new location for the 2022 edition of its festival.

There will also be takeovers from a number of collectives including Daytimers, Berlin’s Room 4 Resistance, Touching Bass, Dalston Superstore, Machine and Elena Colombi’s label Osáre! Editions. See the full list of names over on the Field Maneuvers site.

The festival, self-titled the UK's best "dirty little rave", was originally due to take place in September 2021 but was postponed due to the possibility of a government U-turn on COVID-19 restrictions.

The sold-out festival is also releasing an extra batch of 200 tickets, which you can pick up from their site at 9am (BST) tomorrow (8th July). 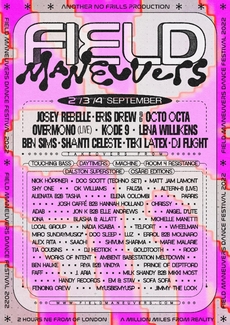 After Astroworld, what is being done to stop crowd crushes from happening again?