Freddie Gibbs has announced his fifth studio album, '$oul $old $eperately', and unveiled its lead single. Check out the video for 'Too Much' below.

The Grammy-nominated Gary, Indiana rapper will release his major label debut album via Warner Records on 30th September. It's the follow-up to his fourth studio album, 'Freddie', which was released back in 2018.

'Too Much' features Memphis MC Moneybagg Yo, and comes accompanied by a casino-themed video directed by JMP. Check it out below.

While a tracklist has yet to be released, Gibbs previously revealed Pharrell, The Alchemist, Madlib, and Boi-1da will share production duties on the album.

Leading up to the album's announcement on 2nd September, Freddie placed mysterious casino-themed billboards (pictured below) across the country with a toll-free number that gave information and clues about the upcoming project.

Gibbs joined Warner Records shortly after the release of his 2020 collaborative album with Alchemist, 'Alfredo', which landed a 2021 Grammy nomination for Best Rap Album.  Also in 2020, Gibbs and Madlib released an instrumental version of their collaborative album 'Bandana'. 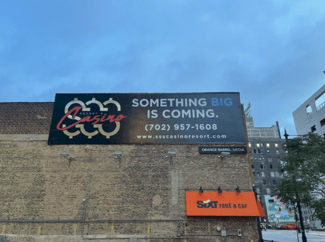