The 20th anniversary of Kevin & Perry Go Large is set to be celebrated in Ibiza.

After initial plans were disrupted by the coronavirus pandemic, Kevin & Perry are "springing back bigger and better" to celebrate two decades since the iconic film's release.

Returning to Amnesia, where the original club scenes for the cult film were shot, two takeovers will take place on Monday 6th June and Tuesday 27th September, where both the Discotheque and Terrace will be host to a number of trance and old school faces.

Alongside Seb Fontaine, the DJ that originally played during the actual filming, and the curator of the iconic soundtrack, Judge Jules, who'll perform across both dates, alongside Ibiza favourites in the form of Brandon Block, Ben Nicky and Lovely Laura.

Speaking about the event, Judge Jules said: "What’s astonished me about Kevin and Perry is that its appeal spans the generations. Each track from its soundtrack is familiar to everyone between the ages of 13 and 50. Having been involved in the movie’s soundtrack, and having been in Ibiza when it was filmed 20 years ago, I could never have imagined that K&P would have such enduring musical and cultural significance.

"There have been a number of films covering Ibiza club culture, but none has come close to Kevin and Perry, in terms of its everlasting popularity. Going back to where it all started for the 20th Anniversary in Amnesia will be a special occasion indeed.”

Limited Early Bird tickets are on sale now for €33 viawww.amnesia.es. Check out the full line-ups below. 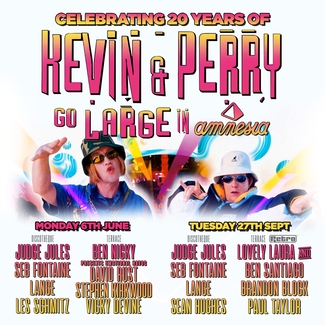