Grace Sands, Marie Malarie, Michelle Manetti, and founder Shay Malt have been announced to play the takeover, which will commence on the club's middle floor at 10AM on Sunday 13th February. Those still standing are promised "harder dance" with "no speed limit".

"Trade has always been a melting pot for it's crowd and it's music. I can't wait to welcome back our Trade family and introduce new audiences to our journey through sound," said Trade founder, Laurence Malice.

DJ Mag's recent long read on Trade - published to mark the anniversary — explores the history of the legendary UK party, which was instrumental in bringing "on-and-on party culture" to Britain by way of LGBTQ+ after hours events, initially from 3AM to 9AM.

Paying homage to the session's slogan — 'The All Night Bender' — DJs including Pete Wardman, Ian M, and Steve Thomas were among those in charge of the soundtrack, alongside the late-Tony de Vit, often cited among the most influential figures in underground 1990s British dance music. 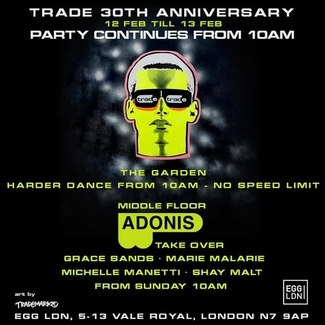