A man on a solo camping trip on the Yorkshire Moors has revealed how he had an "unbelievable weekend" after accidentally joining an illegal rave.

Oliver Broome from Leeds ventured out for a quiet camping trip on Oxenhope Stoop Hill in Bradford last Saturday (April 2), before encountering unusual noises beyond his tent.

"The first half of the night went as planned, I'd pitched up, made my dinner on my little stove and had a couple of beers," said Broome, speaking to Yorkshire Live. "Around 10.30pm I got in my sleeping bag to start winding down for the night. It was at this point it got strange, I could hear talking."

"I was in the middle of nowhere out in the moors so to hear talking at night was disturbing," added the 29-year-old. "I could hear some lads talking and they seemed to be getting closer, obviously I'm in the middle of nowhere - I thought I was going to get murdered for sure. The voices were getting closer and closer so I decided to get my boots on and go out to confront them head on. I jumped out my tent and they were scared as they didn't know I was there."

Shortly afterward, Broome said he noticed approximately 50 people arrive, before setting up their own tent with DJ equipment and strobe lights "like a nightclub". According to Broome, the rave continued until around 7am.

"They were more shocked that they had bumped into a random camping guy in the middle of nowhere," he said. "It turns out they were having an illegal rave. They said 'you're more than welcome to join us, we have loads of beer just help yourself'. I had no choice really, as my tent was right near the speakers so I got stuck in."

"The chances of something like this happening in the middle of nowhere are unbelievable." 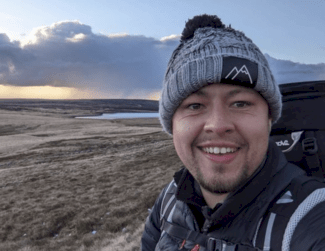