Movement Detroit has revealed the first 20 names set to perform at this year's festival.

Welcoming crowds for the first time since 2019, the legendary techno event will take place across Memorial Day Weekend, 28th to 30th May 2022, inside Hart Plaza at downtown Detroit’s riverfront.

Alongside headliners in the form of Drumcode boss Adam Beyer, Detroit native and Movement mainstay, Jeff Mills, and Richie Hawtin, a number of other artists have been announced, including drum & bass legends Goldie and LTJ Bukem, who are set to go b2b for the very first time.

You can see the full announcement below. 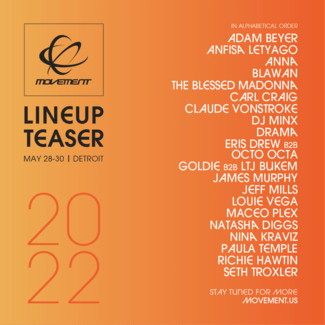