New London festival Risen has confirmed the full line-up for its inaugural edition next month.

Taking place on Saturday, 9th April, the new day-to-night festival will take over a number of venues around the Hackney Wick area, with various artists and crews set to "celebrate the divine feminine".

The line-up now includes Adonis party regular Michelle Manetti, as well as London-based DJs such as Amelia, FYI Robin and Fay Carder, among others.

The festival previously announced that its debut edition would host the likes of Sicaria Sound, Tash LC, Tia Cousins, Mina, Club Fitness and Kiara Scuro, among many others.

Speaking about the Risen team's plans for the event, festival co-creator and creative director Alice Franklin said: "The response to the festival so far has been inspiring, and we feel so lucky to be adding even more new talent to Risen.

"We exist to champion these up and coming artists in underrepresented groups in the electronic music industry and set meaningful change for 2022 and onwards, hopefully with the love and support of all music fans behind us. The dance floor is open to all, and we hope to see Risen full of people who support our mission." 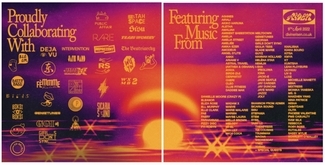