'Sonic Liberation Front: In Solidarity with Iran' has been curated and programmed by London-based Iranian artist Pouya Ehsaei, with shows featuring women and non-binary artists from the country or with Iranian heritage, including Lafawndah, Xeen, Aida Arko, Anahita Shamsaei, Mariam Rezaei, Azadi.MP3, Eye-Duh, and Foori.

Broadcasts begin at 10AM and finish at 12AM on both days, with segments re-broadcast through a number of digital platforms, including NTS, Movement Athens, THF, Uumphff, Disco Tehran, Noods, and Refuge Worldwide.

Mahsa Amini, a 22-year-old Kurdish woman, was killed in police custody on 16th September after allegedly being arrested for wearing a loose hijab. Protests have brought cities to a standstill, leading to mass arrests and a number of fatalities — 41 people have been killed last Sunday. The government has also effectively shutdown internet access in a bid to prevent images and reports from reaching the wider world.

"Iranian women aren't victims waiting to be rescued, but fighters — we always have been," Iranian techno artist Anahita Shamsaei told RA. "We're asking for our simple rights. And it's absolutely important to clarify something here: Iranians aren't protesting against Islam or anything related to that. This is about human rights, specifically women's rights, which is mainly a sociological and social issue... One of the biggest feminist rights movement in the Middle East region has risen once again. I'm proud Iranian women are fighting so powerfully to win their basic human rights."

Earlier this week, hundreds of international artists signed an open letter in support of rights for Palestinians following military action taken by Israel in Gaza, which left more than 230 people dead, thousands injured, and some 90,000 displaced. Radio Al Hara and the Al-jisser cultural space will broadcast a one-off show featuring musicians supporting the pledge 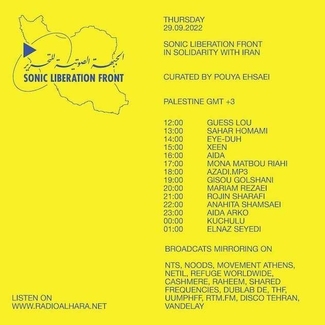