The Slam Tent is set to make a return this summer after a six-year hiatus.

The legendary stage will make its comeback for a three day festival collaboration with FLY at Hopetoun House in Edinburgh, running 29th April - 1st May 2022.

Scottish techno duo Slam — AKA Stuart McMillan and Orde Meikle — will play twice during the event, on Saturday and Sunday. Other highlights over the course of proceedings include Ansome live, Rebekah, Skream, and Ellen Allien.

“We're so happy to be bringing our iconic Slam Tent to Hopetoun House over the May Day Bank Holiday weekend. We’ve invited some amazing international DJs as well as a host of incredible Scottish talent to join us in celebrating its return. It’s been six years since the last one and we’re looking forward to welcoming a new generation of Scotland’s ravers and clubbers to enjoy this special and unique experience," said Slam's McMillan.

"After a 6-year hiatus, the return of such a cultural institution will be an awesome way to kick off the summer festival season and we could not be more excited in welcoming a huge lineup, brimming with so many great Scottish artists alongside an array of international acts," added FLY Director Tom Ketley.

The Slam Tent made its first appearance in 1997, and quickly became a focal point for dance music at T In The Park festival until the event stopped in 2016. Since then it has graced institutions such as Glasgow's Riverside Festival and Electric Frog.

Revisit DJ Mag's Selections feature with Slam from 2020, and watch back at the duo playing live from our London HQ. 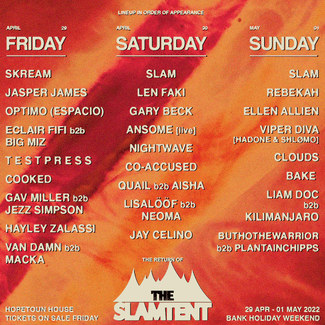