Swedish House Mafia have announced the release of a record player, music production desk, and armchair in collaboration with IKEA.

The Swedish homeware brand are making their foray into affordable home music production designs. Their new OBEGRÄNSAD (meaning "unlimited" in Swedish) collection promises 'the versatility to offer solutions for the home setup whether you are a music producer, DJ, or musician – as well as offering solutions for simply relaxing and listening to music."

The desk is furnished with two speaker stands and includes a pull-out shelf below the desktop that allows for a MIDI keyboard, for example. The armchair is aimed at creating "a relaxing environment to enjoy your music experience in the home". However, the piece de resistance is the record player; IKEA's first turntable since 1973, which will work with its ENEBY speaker. See a photo below.

“The design supports creating, playing, enjoying and even just setting the mood," said Swedish House Mafia. The EDM trio recently partnered with IKEA to share their own take on the furniture giant's famous sturdy blue bag.

In April, the group comprising Axwell, Steve Angello, and Sebastian Ingrosso released their debut album, 'Paradise Again', The album contains previously released singles 'Redlight', 'Moth To A Flame' with The Weeknd, and more. 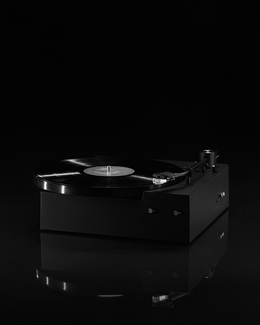