Tomorrowland has shared the full line-up for its 2022 edition, which will take place over three weekends in July.

Over 700 artists have been confirmed to play the festival, which returns this year for the first time since 2019.  Having announced the stage hosts for 2022’s festivities earlier this week,  Tomorrowland has kept the momentum going by revealing the enormous line-up in its entirety. You can check it out below.

Many Tomorrowland regulars will return to play the festival this year, including Martin Garrix, Dimitri Vegas & Like Mike, Armin van Buuren, Lost Frequencies and Paul Kalkbrenner. Eric Prydz will also bring back his famous HOLO concept for the occasion.

This year's Tomorrowland will take place from 15th until 17th July, 22nd until 24th and 29th until 31st July, as confirmed earlier this month.

All ticket information for this year's edition of the event can be found via Tomorrowland's website. “Global Journey Travel Packages” will go on sale on 12th February, with worldwide pre-sale tickets going on sale from the 19th and full ticket sales from the 25th.

2022's event will be Tomorrowland's 16th edition, and it will centre around the theme 'The Reflection of Love'. The festival will go ahead at its usual home in Boom, Belgium and the full line-up will be revealed in the coming months.

Last month, it was revealed that Tomorrowland and Rock Werchter were linking up for a new festival in Belgium, called CORE, in May. 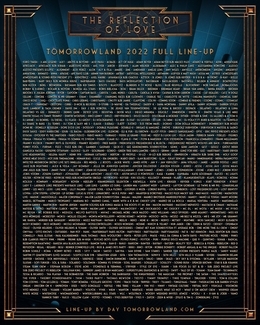