Tomorrowland has announced the launch of a new DJ and producer school, aimed at both kids and adults.

The Tomorrowland Academy will run Summer Camps in the coming months at the festival's spiritual hometown of Boom, Belgium. The first will invite hopeful talent aged between eight and 17 years to attend, from 11th to 14th July.

Participants will be mentored by top artists on everything from beat matching and EQing to loops and hot cues, with production classes also involved. The week ends with a live spectacular on one of the Tomorrowland stages.

The second and third instalments, which are for people aged 18 and over, run over the weekdays of 18-21st and 25-28th July. These dates are in between the festival weekends and attendees also get Full Madness Access passes to Tomorrowland itself. This includes an exclusive backstage tour and the chance to perform on one of the Tomorrowland stages before gates open to the public.

"DJ bootcamps" will be held just 200 metres from De Schorre, the site of the festival, and feature workshops with electronic music professionals, networking opportunities, tips and tricks sessions, and inspirational talks with industry experts and regular Tomorrowland artists.

Both the kids and adult classes are now taking bookings. Prices range from €189 to €950, with the latter including a festival pass. Run in conjunction with the Amplify Academy, based in Hasselt, Belgium, plans are being developed to expand the academy following the initial dates, and an online platform is also being created with a similar focus on DJ and producer education and training, due to launch in 2013.

In February, Tomorrowland announced its line-up for 2022, which runs on three weekends this year — 15th - 17th, 22nd - 24th, and 29th - 31st July. Amelie Lens, Maceo Plex, Tale of Us, Jennifer Cardini, Martin Garrix, and Eric Prydz's HOLO are among the confirmed sets. 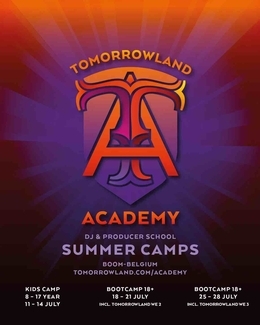