Eat Your Own Ears will celebrate its anniversary at The Warehouse Project this autumn.

Taking place as part of the Manchester venue's 2022 series - which also boasts Peggy Gou's Gou Talk, Michael Bibi and PAWSA's Solid Grooves and more this season - the event will also feature the likes of Folamour, Jayda G, Romy, among others. Check out the full line-up below.

Speaking about the landmark event, Eat Your Own Ears founder, Tom Baker, said: “Ever since Eat Your Own Ears hosted an event at The Warehouse Project at the Boddingtons Brewery back in 2006, EYOE has very much enjoyed being part of curating some epic and thrilling events, seeing the WHP grow and develop into something very special.”

“There is always a fantastic level of expectation and buzz when the lineups are revealed," he added. "So I’m very proud to celebrate Eat Your Own Ears’ anniversary with another eclectic and brilliant lineup that brings together so many of the artists EYOE has worked with over the years alongside some exciting new artists, that is sure to be a truly joyous and magical night in Manchester.”

Running from 2pm to 4am, tickets for the takeover are on now on sale.

Last month, Four Tet shared a new track, 'Scythe Master', which appears on a new compilation released through Eat Your Own Ears Recordings. 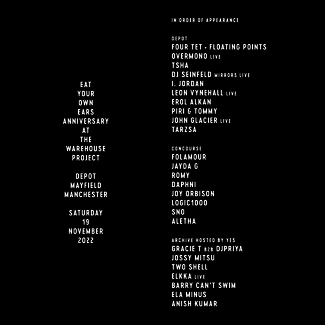