Mixers have come a long way since the basic models that consisted of a two-channel box with no EQ — just a simple conduit for merging two records together. Now, mixers come with a wealth of features that are truly astonishing and allow DJs to do all sorts of booth-based wizardry.

Different mixers have different vibes depending on your style, the way you mix and what you want to mix. It now isn’t just a case of putting two records together side by side, or in the transition — mixers are now instruments in their own rights, enabling DJs to get really creative in the mix to add to their performances.

Allen & Heath’s latest offering, the XONE:PX5 is a new four-channel analogue mixer (with digital sensibilities) that is aimed at the upper end of the scale. It can easily be installed for club use or for a rather decent home DJ set-up.

Allen & Heath mixers are one of the industry standards — they can be found in DJ booths the world over. Generally it will be either one of theirs or Pioneer DJ’s mixers that will be gracing the booths where most DJs play. Allen & Heath’s mixers are readily specced on many top DJ’s riders as an alternative to that usual mixer because they are rock-solid performers, sound great, and come with a very good heritage — and the PX5 carries on this tradition.

The build and look of the PX5 is — as to be expected from Allen & Heath — up there with the best of them. An all-black metal casing makes up the chassis. The upfaders and crossfader have a firm, nice flowing feel to them, whilst the pots, rotary knobs and buttons also have a firm assured action. We like how Allen & Heath have implemented the LED peak meters and the colour scheme that goes with them. In fact, Allen & Heath’s use of colours in the new mixer is a welcome departure from the norm and gives the PX5 an identity of its own.

The PX5, as mentioned, is a four-channel mixer that has three standard inputs — Phono, Line or USB. The USB input allows DJs to connect their laptops and use the PX5 as a soundcard — offering five stereo inputs and outputs. This gives users a wealth of connection possibilities for more adventurous DJ set-ups. Each channel has the usual three-band EQ, but unlike other mixers there is only one filter section (to the right of the four input channels), which can be switched on and off for each channel. Some DJs may prefer a separate filter knob on each channel, but in use one shared by all four channels doesn’t detract in any way as combining this with the FX gives more than enough creative control for DJs who like to really work their mixes.

The FX which can be found to the far right of the mixer are fun to play with, and add extra dimension to the mixer. Allen & Heath integrate FX in their mixers differently to what some DJs might be used to with other competitor’s mixers, but after a good few hours in the mix — and messing around with what’s on offer — DJs should be pretty up to speed with how the PX5 does its thing in the FX department. 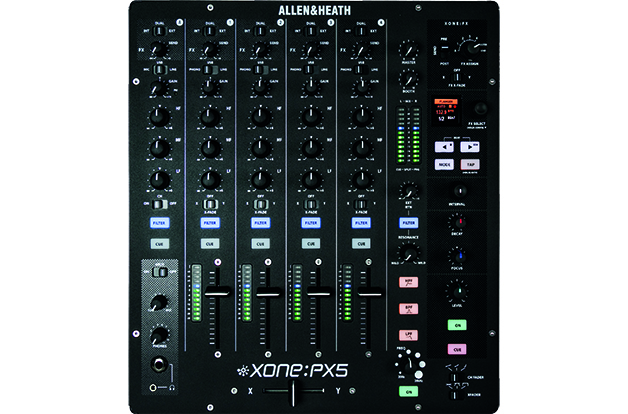 To be honest it is pretty simple. Select your FX from the list available, decide which channel to put it on — and then away you go. The DJ gets to adjust the parameters of the FX using the Decay, Focus and Level knobs as well as the Beat tap and Interval knob. Dialling in more of each makes the effect heavier, and toning it down makes for a far subtler implementation.

A nice tip that the Allen & Heath guys told us about was to route the internal FX in send mode and apply it to a channel, offering up some interesting, cool trippy FX moments. The use of FX in the PX5 is more akin to how FX would be used in a production sense and with the ability to add external FX hardware via the send and returns makes for a very powerful tool indeed.

The PX5 is a great mixer for DJs looking to take it to the next level. It gives club-style performance with ease of use that makes it easy to jump onto and get the most out of straight away. Some mixers do take time to get to grips with but the simplistic — or a better word, straightforward — nature of the PX5 means that the learning curve is a short one. Which will be welcomed by many DJs, but let’s get one thing straight — while it may be straightforward, it is also a very powerful mixer, especially with the X-Link, MIDI and USB connections that allow drum machines, synths and controllers to be added into the mix.

Hype: A wicked mixer that has a wealth of connection possibilities, looks good and — above all — sounds great.

Gripe: Only one filter control shared across the four channels.

Summary: The XONE:PX5 is the next generation of Allen & Heath mixers that has a lot of functions at a competitive price. It has the famous Allen & Heath sound quality, and is a joy to use.