Initially announced back in 2020, Bluetooth LE Audio ushers in the next generation of Bluetooth audio; "a new era of smart audio", which aims to make making audio streaming over Bluetooth more energy efficient. Bluetooth LE Audio differs from the previously named Classic Bluetooth by operating on the Bluetooth Low Energy radio.

The innovative Auracast broadcast audio feature promises to "deliver life-changing audio experiences", according to the Bluetooth Special Interest Group, the Bluetooth SIG, a community of over 34,000 companies that produce and design products that use wireless technology. You can see an Auracast infographic below.

In other headphones news, Dyson recently launched their first wearable in the form of new Bluetooth headphones called Zone, which feature a steel visor that runs from ear to ear and filters the air the wearer breaths, delivering purified air to your nose and mouth. 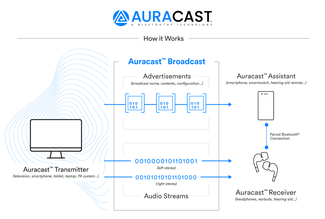