Submitted by Jon Dommett on Mon, 2015-11-09 16:33
Style:
“Hardwell music.”
Best known for:
“My DJ sets, productions, Revealed Recordings, Hardwell On Air radio show.”
Tune of the year:
“Tiësto & KSHMR feat Vassy ‘Secrets’.”
From:
Netherlands
Breakthrough DJ/producer of 2015:
“Kill The Buzz, Wiwek and Tom & Jame.”
Is the future still bright for EDM?:
“Absolutely! Why wouldn’t it be? Dance music is very healthy right now and doesn’t look likely to disappear overnight, least not to me!”
Does the constant travelling and DJ lifestyle ever take its toll on you mentally?:
“Life as a touring artist can be gruelling at times but you have to love what you do, otherwise it’s really not the path for you.”
What cause is closest to your heart?:
“I’ve just launched my own charity project, United We Are Foundation. I’m planning to set the world record for the biggest-ever guestlist by offering 100,000 fans the chance to come to the show on my personal guestlist. The show will be in Mumbai, India on 13th December and the cause is to give back to the community by providing a social change for underprivileged kids.”
Why aren’t there more women in the Top 100 DJs poll?:
“I’m glad to see more female artists breaking through and making a name for themselves in the scene as a whole. I can only foresee that this growth in female artists in electronic music will see more women making it into the Top 100 DJs poll.”
What do you think of DJs who use ghost producers?:
“My view is if you’re not producing your own tracks, then just be honest. The fans don’t deserve to be lied to.”

He may have been dethroned after two years at the top of the poll but Hardwell’s bigger than ever. Robbert van de Corput’s 2015 was a very good year even by his bombastic standards. His debut album ‘United We Are’ was released in January, while a residency at Ibiza’s swish Ushuaia, Hardwell’s Carnival, saw the EDM star slay all contenders for sheer chutzpah.

But it was the filming of a biopic documentary movie following his hectic life on the road, I Am Hardwell – Living The Dream, premiered at Amsterdam Dance Event, that really took him outside his comfort zone.

“It’s kind of odd to see yourself on screen, especially in a cinema environment,” Robbert admits. “I’m not an actor so for me this is really unusual, but it’s always amazing to see how much I’ve evolved, not just as an artist, but also as a person.

“When we first started filming the very first documentary I was conscious the camera was filming me but these days when the camera is rolling I’m not really noticing it at all,” he continues. “So it’s strange when I see myself on the screen talking or DJing or travelling or whatever, in a kind of natural state, it’s really giving a glimpse into me and my life and this whole journey.”

No stranger to collaborations, Hardwell hooked up with several artists this year, including rising artist Wiwek, whose brand of EDM ‘jungle terror’ has been getting him a lot of attention of late. Robbert loves working with others, suggesting that when it’s right, magic can happen.

“The magic that comes out of working with somebody else is always unpredictable,” he says. “I really enjoy working on my own in the studio but from time-to-time it’s a refreshing change to actually jump in the studio and just see what happens.

I’ve done a lot of collaborations over the years, and not all of them have been released. Sometimes the magic isn’t there, but when you get it right it’s really special. I’m always searching for that wow factor when making a record.” 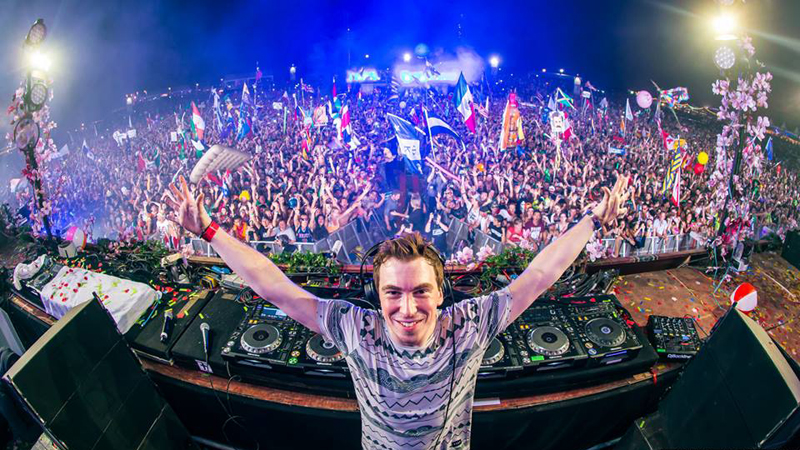 Of course, his biggest collabo in 2015 was with Armin van Buuren for the electro zap of ‘Off The Hook’, an opportunity to work with another of his heroes. “What’s there to say about Armin that hasn’t already been said? He’s such a gifted and natural producer.

I’ve always loved the music he makes, and his ear for arrangement is second to none. It was a real pleasure to work with him on this track, and I feel we both brought some very defining qualities to this record. It captures our different styles and packages it up well — plenty of big electro groove and lots of pace too, with this classic euphoric break, which I love!”