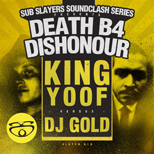 9.0
Facebook Twitter Google+
The series where assorted Sub Slayers artists face off against one another continues. Gold Dubs, formerly just Gold, teams with King Yoof on lead track ‘Tempo Dub’ that utilises a familiar refrain weed-smoking refrain. Dubwise breakbeat skank rolls out into junglist riddims as it burns down, while ‘Unreal’ with Aries starts in a future jungle stylee that unfolds like an EZ Rollers cut on Moving Shadow but with added warping bass. ‘Separation’, with Max Powa, is Babylon-burning broken bashy bizness, and ‘Babylonman’ — also feat Max Powa — is like 1995-style d&amp;b by Shy or Roni. Boss tunes.

9.0
Facebook Twitter Google+
When you come storming out of the blocks in the manner Objekt did, people will surely start to expect a certain something special from you. Exactly what that thing is, is probably quite hard to put your finger on considering that you got known for dumbfounding a lot of cats but Objekt? he's a wily dude. A guy who'll simply hit you with two slices of impossibly well-produced, rhythmically caustic, bruk techno and then bounce.

7.5
Facebook Twitter Google+
Seemingly masters of their own sonic reinterpretation, the Catalan duo, Downliners Sekt, return after a period of relative radio silence with 'Balt Shakt': a welcome double-sided blast of static-soaked 4/4 that hints at the direction of a new LP.

'Book Of The Jungle EP'

9.0
Facebook Twitter Google+
This is superb. Nuphlo utilises a smidgeon of tabla, a slice of steel drums and some bashy beats on ‘No Me Nah’, which is ridden by DJ Lantan from Luton’s vox. Middle Eastern funky as reimagined by Bandulu, it comes with an instrumental version and a 160bpm footwork revamp that is smartly loose-limbed and skittery. Title track ‘Book Of The Jungle’ is like an intricately percussive Photek cut from his ‘Ni Ten Ichi Ryu’ era, a sorrowful sitar and sweet birdsong painting a picture of assorted rainforest shenanigans, and ‘Nona’ — featuring Nona Kalra from Birmingham — is a gorgeous wailing trip-hoppy cut. Out of this world music.

9.0
Facebook Twitter Google+
There's something about BD1982's seven-track 'Casings EP' that simultaneously feels like he's biting Jam City and yet fully producing some of his most interesting work to date. Tracks like 'Casava' and 'Writuals' whir with a similar mechanical voice but it's his exploration into rolling dub on the title track and his command of the minimal elements on tracks like 'Bakkwaa', 'Blud' and 'Clear Walls' that undoubtedly makes this his most 'Colour and the Shape' like moment to date.

8.0
Facebook Twitter Google+
I've always loved the freewheeling passages of improv noise in krautrock, so Death Comet Crew's textural bazaar for the Citinite label, 'Galacticoast', is a bit of a double-edged sword for me. Delightfully weird and unsettling in equal measure.

8.5
Facebook Twitter Google+
After collaborating on 'In Reverse', one of the stand-outs from the recent Keysound compilation, London-based producers Logos and Mumdance serve up four more slices of their co-made machine music with the 'Genesis EP'. It's home to the PIV mix of 'In Reverse' and the incendiary 'Wut It Do' — two tracks that have already set chat rooms ablaze — but it's the inclusion of the brutalist eight-bar 909 exploration 'Turrican 2' that should really have you reaching for the bazooka emoticon.

7.0
Facebook Twitter Google+
It's been a couple of years since Mutt graced the roster of the Brighton- based Donky Pitch label, but you can rest assured his return is a pretty emphatic slice of rave- referencing hyper colour that manages to sound incredibly individual.

7.5
Facebook Twitter Google+
It really would take someone of Djrum's production calibre to properly flip a rap jam as visceral and unique as Onoe Capone's 'Milkyway 1311'. Soon to be released on a limited edition 10" alongside a reworking of Royce Wood Junior's 'Jodie'.

7.0
Facebook Twitter Google+
Mssingno's the dude who made the Verve-sampling beat for CAS's 'Drugs Don't Work'. That's probably only really important if you've actually heard the tune in question, considering it takes a brave producer to chunk a thing so brazenly but, conversely, his work on beats like 'Skeezers' and '124th' very much show that Mssingno's got both the skill and the foresight to tackle multiple styles. From hoods up to panties down, he seems able to really nail it.

8.5
Facebook Twitter Google+
We like BBB, with their big ‘taches and afros and ‘70s cop show ephemera. The original here has ravey diva vocals and a male rap vox over half-time beats that switch up into breakbeat tempo every so often. Soloing electric guitar enters the equation later on for a song-based cut that deserves to be a radio hit, in a Stanton Warriors kinda way. Mike Delinquent turns it garage, Bordertown make it tech-house and goth rockers Calling All Astronauts add more guitar and housier beats.

7.5
Facebook Twitter Google+
'Reality Check' is a bassline-driven tech-funk power-driver that features snippets of male and female vocal samples that allude to dream states. A nice mid-set groover, it's followed by a similarly-paced 'Invasion' that boasts a raspy bass, panoramic whooshes and timpani flutters. Title track 'Optic' also places most emphasis on its grinding bottom end, while 'Gorilla Tech' is more of a 110bpm glitch-hop piece that features some rather nice keys later on. Solid EP.

9.0
Facebook Twitter Google+
This retelling of Shakespeare’s Othello in a grime stylee works brilliantly, with production by Polar Snares and very clever up-to-date reschooling of the classic jealousy story in suitably 21st century street lingo by the lyricists. Ace.

7.5
Facebook Twitter Google+
We’ve bigged up this Camden-based trap kru ever since they formed a couple of years ago – and have they given us a word of thanks? No. Still, that’s not what it’s about, and here ‘Raving Shoes’ — featuring UK rapper Elian Grey - is riddled with space invader noises, a burbling bass and sparse beats, with Elian’s vox commanding throughout. ‘Wake Ya Whole Block’ is also taken from their forthcoming ‘Made In Camden’ album, dramatic old skool synths and muted bassline making it surprisingly subdued.

8.0
Facebook Twitter Google+
If you've not really been following the rampant technoid explorations of the Bristolian trio that make up Livity Sound (namely Peverelist, Kowton and Asusu) then it definitely bears repeating that they've become a go-to outfit for strikingly original, wonky club-techno-weapons. Ahead of their eponymous album's release, their eighth vinyl drop harbours a duo of collaborations from Pev and Asusu that both rely on an incredibly squat and solid kick drum, whilst their collective tendrils tease high into the top lines.

9.0
Facebook Twitter Google+
A producer whose sense of style and rhythm is simply unparalleled, the unassuming producer's third 12" proper for Hessle screams maturity on one side and completely cuts loose on the other, displaying the two sides of his infuriatingly perfect poise.

7.0
Facebook Twitter Google+
'Reality Check' is a bassline-driven tech-funk power-driver that features snippets of male and female vocal samples that allude to dream states. A nice mid-set groover, it's followed by a similarly-paced 'Invasion' that boasts a raspy bass, panoramic whooshes and timpani flutters. Title track 'Optic' also places most emphasis on its grinding bottom end, while 'Gorilla Tech' is more of a 110bpm glitch-hop piece that features some rather nice keys later on. Solid EP.

8.0
Facebook Twitter Google+
The bass funk title track works really well as a 110bpm early doors piece, laden as it is with heavy dubsteppy b-line, big bastard beats and some nicely flowing, languid male rhymes. ‘The Shake’ features gonzoid Indonesian YouTube sensation Lloyd Popp on a funk-fried backing, riddled with some face-melting bassline warp and incongruous trumpet, and ‘The Rumble’ rolls out a doomstep intro but falls shy of going for the face-melt thang, instead bobbing along like a head-nodder. Good EP.

9.0
Facebook Twitter Google+
On the one hand, audio scientists K-Vector and J-Mars - from the Sirius star system - are kinda like a budget Brummie Daft Punk. But on the other, they’re soundwave manipulators par excellence. Operating in the breakbeat glitch zone only really previously inhabited by Si Begg and Tipper, lead glitchbeat cut here ‘Troink’ - it stands for ‘Time-Reality-Oscillating-Internal-Navigational-Knowledge’, silly - possesses warped bass so alien that it grows eight heads. ‘Sirius’, meanwhile, also has its bassline put through an orgone energy accumulator so that it shags itself. Probably. Loving the alien.

8.0
Facebook Twitter Google+
It's fantastic that there's so many labels releasing club-centric music that's so discernibly raw and wantonly experimental. Root it to a drum beat and you've got tools that manage to just stand the fuck out and actively challenge people. Please, carry on just doing something different and do it so well that next time, you've got to come with something amazing to better it. It's gonna take something pretty special to outdo the weird dub of Will Ward's 'Violiner' though...
admin
Facebook Twitter WhatsApp

8.0
Facebook Twitter Google+
One of the biggest tracks from the Dubs' unstoppable live show is magicked into a warping future garage piece by the two talented Urban Knights dudes. A free download from the Dubs Soundcloud.

8.0
Facebook Twitter Google+
Named after a Clash song, TWR drops this electroid beasty which builds as it progresses by cranking up the 303-sounds before dropping into a body-poppin' section. Goes off after the drop. Cute.
back to top
DJMAG
all sections