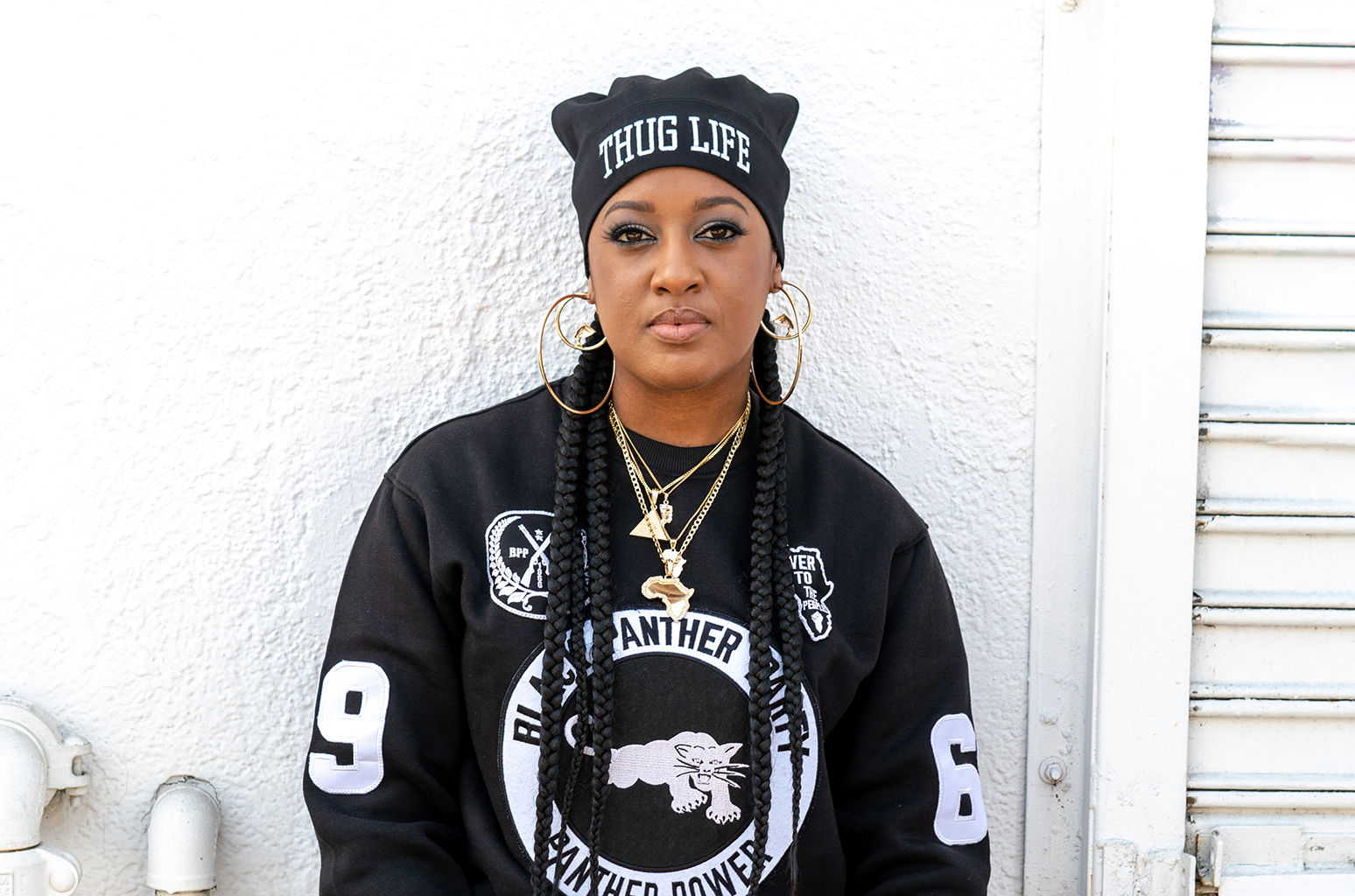 9.5
Facebook Twitter Google+
Immense smartness and talent demonstrated here by Rapsody — canny enough to get GZA in to spit some 'Liquid Swords' lines (and he's not lost a single iota of his unmistakable presence), and D'Angelo to provide some gorgeous growls and croons, but also confident and assured enough in her own abilities to command the track front and centre. Over sunny, peachy beats, she breaks down a beautifully nostalgic look back on golden age tropes that never seems like retroism for the sake of it; rather, it comes across as a properly warm and glorious tribute to hip-hop history. An utterly irresistible track.

8.0
Facebook Twitter Google+
'Bah Wounds' is another compelling release from Vic, and this single shows why — for starters, the backing is THICK and OOZY as fuck, with lovely, chunky '80s synth riffs over rolling jazz-funk breaks, very akin to an Alchemist production. Spencer's verbals are non-stop and utterly compelling, and the moment towards the coda where the beat absconds, a bass-run takes over and Spencer's rhymes get even faster and more furious is genuinely heart-stopping. Welcome this maverick genius back with open tentacles.

8.0
Facebook Twitter Google+
A lot of cognoscenti might say that the Ultra Nate sample that forms the basis of this banger is a little obvious — Manu Crooks also used it to great effect on 'Blowin' Up' — but I really couldn't care less when Headie is in such command of the steel-mesh, and so utterly fearless lyrically. For a track that's anthemic, it's engagingly downbeat, in no hurry to crossover, and still keeps its intentions vague but its impact instantaneous. Whatever party you drop this at is gonna go OFF. Don't leave home without it.

8.0
Facebook Twitter Google+
At any given second of any given day, someone from the American underground of grimy gutter-bound heavy hitters will be releasing new music, most of it certainly samey, but all of it utterly compelling. Right now, this leaps out of the ever-growing pile of menacing murkage, thanks to the production from Camo — the moody Serpico funk touched with sporadic detail designed to unhinge the listener, with dubby little eruptions of vocal, a janglingly recurrent lick of guitar harmonics and scratches that swim out beyond normal space and firmly into an avant-garde zone. As addictive, in its way, as UK drill — same headspace, but from an entirely different soundscape. Essential.

8.0
Facebook Twitter Google+
Superb four-tracker from the ever-dependable Chairman Maf (alongside Kuartz and Remulak, perhaps my favourite UK instrumental hip-hop artist). 'Pill Cosby' is as disturbingly woozy as you'd expect, loungecore grooves and vocals sliding gorgeously under scarifying vocal samples. 'Colour Blind' tweaks tropicalia vocals into spooky psychedelia, and undercuts it all with thrumming bass and beats, before 'This World' hits hard with grainy, mournful strings and a neck-snapping funk undertow. Bonus Bandcamp cut 'FLYY' is a heady, heavy delight too. Snap this up there or on Spotify, it's a treat.

7.5
Facebook Twitter Google+
The new 'DiVE' EP by this dependably dazzling Detroit genius has been characterised as BM's dive into R&B — I'd say that's not exactly it. It's way more slippery than that, a suite of beautifully kooky, odd hip-hop soul just right for summer. This single is jazzy, funky, shot through with a lunging bassline that makes it perfect for your back yard and your Blaupunkt, and the verbals from MAHD and BM syncopate with the grooves to great effect. Check it out, then drink deep from the EP and hold onto summer as long as you can.

'Something Else Entirely (Not Quite Human) feat Lee Scott & Dabbla'

8.5
Facebook Twitter Google+
Love the schlocky, mad laboratory vibe of this — slow-grinding beats, dungeon-esque bass, test tubes and bunsen burners clanking together and igniting strange lysergic plumes. Smart of BB to get Lee Scott and Dabbla in on this wonderfully woozy ruckus: they keep things firmly on a sci-fi body-horror tip, the hook slathered in creepiness, the track always in danger of slipping into genuinely haywire madness. Utterly fantastic single from an utterly fantastic album, the just-dropped 'Still Fresh'. Snarfle these up like a found free sheet of microdots.

9.0
Facebook Twitter Google+
Yass Queen. 'Iconology' is a riot, and this lead-off single is just pure blissful genius — Missy always gets the interlock between bass and kick perfectly right, and this track is no exception, a juddering rhythmic chassis that will rattle your rear-view mirror in deliciously heavy waves. Missy's verbals are commanding, smeared and slurred in all the right places, and as much touched by Kingston as Chicago — her voice has lost its hysteria, but gained an authority that commands you bow down and worship. Goddess.
Neil Kulkarni
Facebook Twitter WhatsApp

7.0
Facebook Twitter Google+
A Mancunian hip-hop artist on a Dutch label owned by Lenzman? Ooh yes, and AS follows up the anticipation built by his 'Meditape' projects on his 'Kaleidoscope' full-length, showcased by this gorgeously appointed slow-burning single. Sharp rhymes, sweet production from HMD, check it.

8.0
Facebook Twitter Google+
If you've not checked out Billy Woods' incredible 'Hiding Places' set yet, DO SO — it's one of the most astonishing hip-hop releases of 2019. This single is lifted from it and really showcases Kenny Segal's impeccable beat creation/selection. I envy you your coming journey.

7.5
Facebook Twitter Google+
The ever-bizarre and engrossing Ankhlejohn has a new album, 'Reign Supreme', out, but this track is from a really great Shaap compilation called 'The Big Lordy' that I heartily recommend. 'Chauncey Billups' showcases AJ's ruff-as-a-badger's-arse delivery over twinkling, smooth soundtrack beats. Essential.

1. HMD 'Deen' Black Butter Records "Pure energy and great vocals mixed with a flawless production — undeniable." 2. KSR 'Headloss' Polarface Records "Nostalgic and uplifting vibes from the future of R&B. Special one." 3. Children Of Zeus 'Hard Work' First Word Records "This reminds me of my childhood. Type of music that will be here forever." 4. Hana Malik 'Shine On You' Soundcloud "A sick, bright vocal married with a banging hip-hop beat. It stays on repeat." 5. Tobi Sunmola 'Be My Lover' GGDS EP "Unrestricted to a genre, a proper feel-good anthem. Suitable to any setting." 6. Chunky 'Lyric Mi' Swamp81 "Bars, flow and beat so different with it. Chunky's like no other. Play this loud!" 7. Chimpo, DRS, Slay, Ragoloco 'No Trust' Box N Lock "Another legendary all-star Manny anthem. This is just hard. Everything you expect it to be." 8. Lay 'Cherries' VAUD "Pure, soulful hip-hop from one of the illest in Manchester. Everyday playlist material." 9. Two4Kay 'Mula' Soundcloud "Keeps any vibe alive. Two4Kay demonstrates versatility at its finest." 10. The Eyes/Fox 'Harder' Estate "One to rock steady and sing with your chest. This is a personal favourite. Proper riddim sound."
back to top
DJMAG
all sections