The second edition of Manchester's Summer of Love has been announced.

Hosted by Manchester-based promotion crew and label Animal Crossing, the festival will return to an abandoned warehouse in Manchester city centre across the August Bank Holiday weekend (27th-28th August).

Off the back of its inaugural outing last summer, the festival will host the likes of Ben UFO b2b Craig Richards, Mr G, Eris Drew, ARPIAR (aka Raresh, Petre Insperecsu and Rhadoo), Margaret Dygas, Nicolas Lutz, and more. Check out the full line-up below.

As well as hosting sets in bespoke environments including car showrooms, railway arches, and their own space, The Loft, the festival will also feature a record fair hosted by the likes of the Vinyl Factory and Palace Vinyl, as well as the Wellness Cafe. According to organisers, it will "be on hand to motivate and elevate attendees, as well as give them a space to slow down and relax, ensuring they leave feeling inspired to nurture their physical and mental wellbeing."

"Following the energy of our first edition, we were determined to push the boundaries & expand the narrative of what defined the Summer of Love," Animal Crossing said in a statement. "An annual occasion to bring people together in celebration of music, arts & wellness. There has been such great ambition for year two and we're super proud of the picture that's been painted."

"To be welcoming such a list of amazing artists to Manchester fills us with joy knowing the creative experience that is still to be revealed. It's not every day you have a Factory within the city centre to transform. We're doubly excited to keep telling the story and sprinkle a little bit of joy across the August Bank Holiday weekend!"

Tickets for Summer of Love 2022 are on sale now. 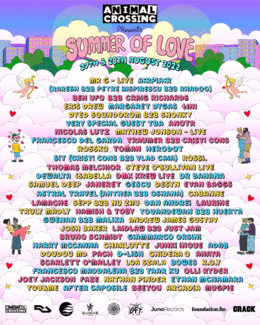