Field Maneuvers has added Laurel Halo, DMX Krew, and more to its 2022 bill.

Self-described as the UK's best "dirty little rave", the most recent edition of Field Maneuvers took place in 2019. It was cancelled in 2020 due to COVID-19 and while originally due to take place in September 2021, was postponed due to the possibility of a government U-turn on restrictions.

This year, the festival's eighth edition will feature takeovers from a number of collectives including Daytimers, Berlin’s Room 4 Resistance, Touching Bass, Dalston Superstore, Machine and Elena Colombi’s label Osáre! Editions. See the full list of names over on the Field Maneuvers site.

Final tickets are on sale now. 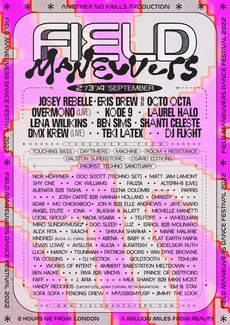