HYTE's 24-hour NYE rave timetable has been revealed for Funkhaus in Berlin, which looks set to be a celebration of the breadth and variety in the current international techno scene. That, and the arrival of 2018, of course.

The event will kick off at 6PM on Sunday 31st December, and run through until 6PM on Monday 1st January, which is pretty much business as usual for the German capital's famously long-winded club scene. In contrast, the list of names is anything but average, with Monoloc, Gregor Tresher, Pan-Pot, Andrea Oliva, Adam Beyer, Tale of Us, Loco Dice, Ricardo Villalobos, Nina Kraviz, and Chris Liebing all playing in just one room.

The second soundsystem showcases more incredible talent still. Confidns, Gheist (live), Modig, Deniro, Bjarki (live), Steve Rachmad, wAFF, Yaya, Ferro, Alex & Digby, Enzo Siragusa and DeWalta are all set to play. With a line up like that, even in the world's foremost city for nocturnal options we're expecting this one to sell out, so if you're planning on stopping by get sorted early to avoid disappointment.

HYTE is no stranger to parties on an epic scale, with October seeing the crew host a three day event in Amsterdam during ADE, and, as we recently reported, soon after the New Year banners come down the team will head out to Vietnam, where they host a stage at the second edition of Epizode Festival. Proof, as if it were needed, that those hitting the Berlin offering are in very safe hands indeed. 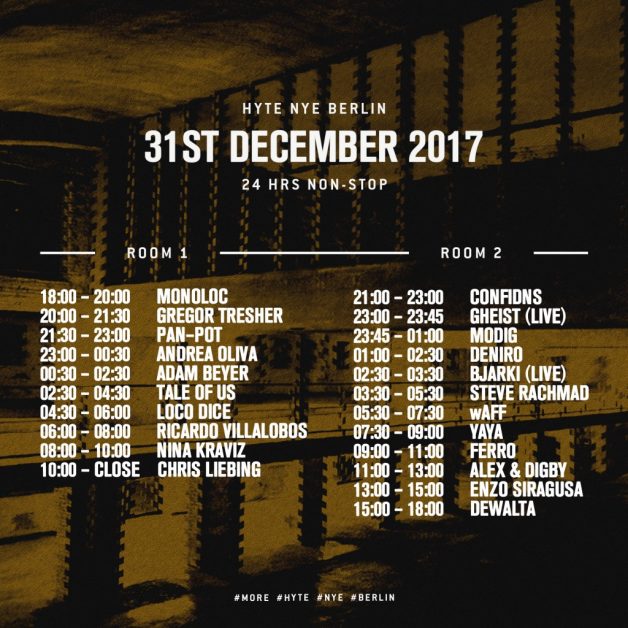