A new club, FØRGE, is set to open in Sheffield in September.

Having drip fed a series of teasers via social media in recent weeks, organisers of the new venue officially announced details on August 10th. Based in a former Victorian steel forge on Effingham Road, which looks out across Tinsley Canal, the club will be cashless, run until 6AM, and boasts a Pioneer sound system and an LED lighting rig. Its capacity is yet to be revealed.

As well as promising a "vast programme,” featuring both local and international acts, organisers shared the news alongside details of its launch night. Taking place on September 16th, headliners Dax J, IMOGEN and Boxia will be joined by local acts including alex.aubyn, Chapel Walk, colecta, FEN (1), Porter Brook and STI. 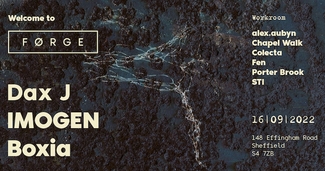 Speaking to Mixmag, director Richard Welch said: “There are great venues here in Sheffield, a real history and community. Perhaps what makes us different is our space. It’s unconventional as a music venue, but that is the attraction. We hope to bring something different to Sheffield, that was always our intention.”

“Our relationship to electronic music has and always will be as enthusiasts first,” Welch added. "We’re a collective of anoraks that have been around the industry for a good number of years, whether it be as promoters, performers or just consumers of the music. We’ve built a great time of like-minded people around us that really love the underground, I hope that will translate as we release our schedules.”

Check out a preview video of the club, shared via Instagram, below, and buy tickets to the opening party here.