Roger Sanchez has been added to the line-up for DJ Mag’s Miami Pool Party next week.

Marking the first DJ Mag pool party since 2019, the event will take place on Wednesday 23rd March at the Sagamore Hotel as part of the Epic Pool Parties series, which lasts from 23rd to 27th March.

Sanchez joins the already stacked bill for the near-sold out party. Other artists on the line-up include Andrea Oliva, Chris Stussy, Dennis Ferrer, Eats Everything b2b Méle and Honeyluv.

The line-up is completed by John Summit, Layla Benitez, Marco Faraone, QRTR and Vintage Culture. Final tickets for the party are available here. Get them while you can!

Other parties taking place across as part of Sagamore’s Epic Pool Party series include Beatport and Repopulate Mars, Defected favourite Sonny Fodera's Solotoko, Disco Disco, and Jamie Jones' Hot Creations label and party. Armand van Helden has just been added to the line-up for the Repopulate Mars’ party, while Kenny Dope has joined the bill for Disco Disco’s event. 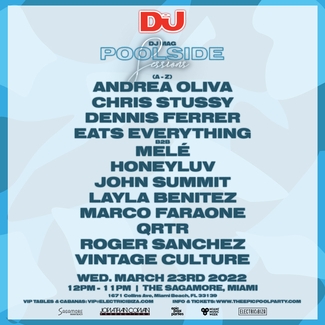