Armin van Buuren doesn’t really do interviews anymore. He’s reached the upper echelons of his chosen career, and doesn’t really need to. The “trance overlord,” as someone dubs him at the Q&A that your DJ Mag hack hosts with him at this year’s revamped Winter Music Conference in Miami, is one of the most successful people in dance music — seen as impeccably clean-cut and well-adjusted by some, as godlike by others. He’s the unflappable, intelligent, fan-friendly king of the #TranceFamily; the record-breaking five-time winner of the Top 100 DJs poll.

“I always promised myself as a little kid that if I ever had the opportunity to make my own radio show, I would do it,” he says. “I felt it was the most direct way to introduce new music to your fans.” He started a weekly show, A State Of Trance, in June 2001 — in Dutch — and a couple of guys in the north of Holland started illegally streaming his show on the internet through Shoutcast, an early streaming protocol. Trance enthusiasts from around the world began following the show, communicating with each other via IRC chat.

“Out of the 10 positive comments on a gig, there’d be one negative one — and that would destroy my life. I wasn’t able to sleep, I was using alcohol too much, and I was feeling depressed — I was really depressed about being No.1. It was crazy”

Armin’s last No.1 gong came in 2012, and he suggests that the pressure came off him after he relinquished the top spot. He got a Grammy nomination in 2013 for anthemic trance-lite ditty ‘This Is What It Feels Like’ featuring Trevor Guthrie, and felt like he could cross off topping the Top 100 DJs poll from his list of achievements. “That’s not to say I don’t want to be No.1 anymore — if you ask Steven Spielberg if he wants to win another Oscar, I’m not gonna lie, you’re only as good as your last film or last production,” he says.

It was just over a year ago that Swedish dance icon Avicii took his own life. And Keith Flint from The Prodigy more recently. How hard did Avicii’s tragic passing hit Armin? “Very hard,” he says, solemnly. “Yeah, very hard. The passing of Avicii is probably the darkest day in dance music, cos he’s the first one to go — and, I hope not, but I think more will follow. I see many DJs coping with mental issues — more than I can say in this interview. It only takes one bad night, one bad decision.

In the first week of July last year, Anastasia Kristensen arrived in the Serbian city of Novi Sad for EXIT Festival. The gig was to mark the halfway point in a year of heavy touring, which would eventually top out at over 80 shows in 34 countries; meanwhile, her first full solo release was finally in the works. Then, as she prepared for her opening night set in the enormous mts Dance Arena, she got a phone call with the news that her father had died. A few days had passed already, and the police had been at his apartment in Moscow.

“When I go to Moscow I feel very different. There is no doubt it’s a homophobic society. Even at the parties I have to remind them that there should be space for everybody. It’s my duty, as someone who’s resident at a queer party to prevent and educate”

Based in Copenhagen, where her flat is a handy seven minutes from the airport, Kristensen is frequently described as a Danish DJ, but in fact, she only acquired a Danish passport in 2017. As she tells it, her life has been marked by her experience of dislocation and immigration. “That has a lot to answer for — why I play this music as I do, why things happen for me,” she offers. “I probably have a different understanding of values, because coming from Russia to Denmark was overwhelming.”

In East Amsterdam, tucked away on what seems like a sleepy street (though that may just be due to the icy weather), lies the home of Don Pepijn Schipper. Freshly renovated — he moved in just the day before our interview — it’s a grand old building of wooden beams and stained glass, but with a slick, modern makeover; think glass walls, minimalistic furniture and the obligatory pool.

“If you want great success you need to offer great sacrifice. Otherwise why would you be so lucky? You can’t just carelessly expect things from the universe”

“They started yelling at me like, ‘You’re insane, why would you say no to this kind of money?’ And I’m like, ‘Because you need to stick by your principles.’ This kind of industry crushes you”

Paul Nicholas Fisher is a straight up Strayan. True blue, down to earth, no messing about. He loves his music, he loves to surf, he loves a laugh with his mates. What you see is what you get; a happy-go-lucky man who seems to emanate joie de vivre and has a tendency to cackle mischievously when he laughs. Beer, banter, beats and not so much as a whiff of bull. He’s as honest as they come...

You’ll have no doubt seen him, too. He’s got a strong online presence and is one of the few DJs who doesn’t do Instagram videos because he feels he ought to, or his manager is holding him at gunpoint and telling him it’s essential in today’s modern game. He does them because, to use his own catchphrase, he “fucking loves it”. In fact, he’s been in front of the camera a lot of his adult life. But in terms of his backstory, and how he went from a relative unknown to one of the hottest tickets in town in less than two years, there’s a chance you might have missed it.

He’s got a lot of gigs coming up this year. He had a lot last year, too. Since his debut single ‘Ya Kidding’ landed on Dirtybird in June 2017, his flippers have barely touched the floor. He achieved the holy grail of aspiring DJs and producers since the dawn of dance music; off the back of just one big club track he became a hot name in house music.

As someone who’s been DJing since she was 14 years old, it’s rare that Brazilian techno star ANNA is lost for musical inspiration. But DJ Mag has, it seems, caught her on the hop. “I don’t know,” she says, smiling broadly, her teeth the kind of immaculate Hollywood white that would work well in a darkened nightclub. “I don’t know what I would play for the family.” She pauses again. The question of what song would unite her relatives in dancing is clearly one worth consideration.

When DJ Mag meets ANNA in Barcelona (her home since 2015), two decades have passed since that fateful night when she first stepped behind the decks. And yet, you can still sense the same youthful enthusiasm for the holy trinity of DJ, dancefloor and music when ANNA talks about her career, which has seen her creep right to the edge of DJ superstardom thanks to a globetrotting schedule and the impact of tracks such as 2018 floor-filler ‘Hidden Beauties.’

“I feel that I can experiment more and more with the North America crowd. I can play something different from what they are expecting from me, and they are open to listening.”

Meditation is clearly hugely important to ANNA. She started meditating eight years ago, and on the late winter’s day in which DJ Mag meets her, ANNA was out of bed at 5am to meditate before the first rays of sunlight reached the Catalan coast. “The first meditation I like when it’s still dark,” she says. “In the past, I never used to do this, but they taught [me] that it’s very beneficial to meditate at this time of the day. I don’t know why. Maybe because everybody’s sleeping.”

When DJ Mag meets Nastia in the lobby of her upscale Berlin hotel one rainy winter’s afternoon, she doesn’t smile, and almost looks a little worried. “I woke up at 2pm,” she says, as though she’s done something wrong. “I’m still jetlagged from my American tour.” As hotel management find us a quiet place to speak, she shows us pictures on her phone of her recent gig in New York City, where she played with Richie Hawtin and Amelie Lens at Avant Gardner. DJ Mag asks her how it was. “It was okay. Americans are different,” she says, sounding a little disappointed.

Of course, Topolskaia isn’t really all that normal. When it came time for her young daughter’s bring-your-parent-to-class day at her primary school in Kiev, Topolskaia showed up with her DJ equipment at the request of the teacher, who said it was progressive and modern. Naturally, the kids loved it, and the story exploded in the press, though Topolskaia thought it would be boring. “I didn’t find it so special, because for me it’s normal,” she says flatly, still looking a little confused.

“I hate festivals... I don’t really get big stages, because there is no energy. No vibe. You’re so disconnected with people, alone on the big stage, so far away you don’t even see the faces. I don’t think it’s good for the culture. I don’t even know if it’s good for money.”

It’s 1997 and a 17 year old Rebekah Teasdale is just finishing work at a French restaurant in the centre of Birmingham. With 30-odd pounds worth of tips in her bag as she steps out into the cool night air, she fixates on the crowd of people waiting to get into the nearby Que Club. Towering above her in its home of an ornate former Methodist church, she’s passed it night after night, fascinated since she started DJing a year ago. 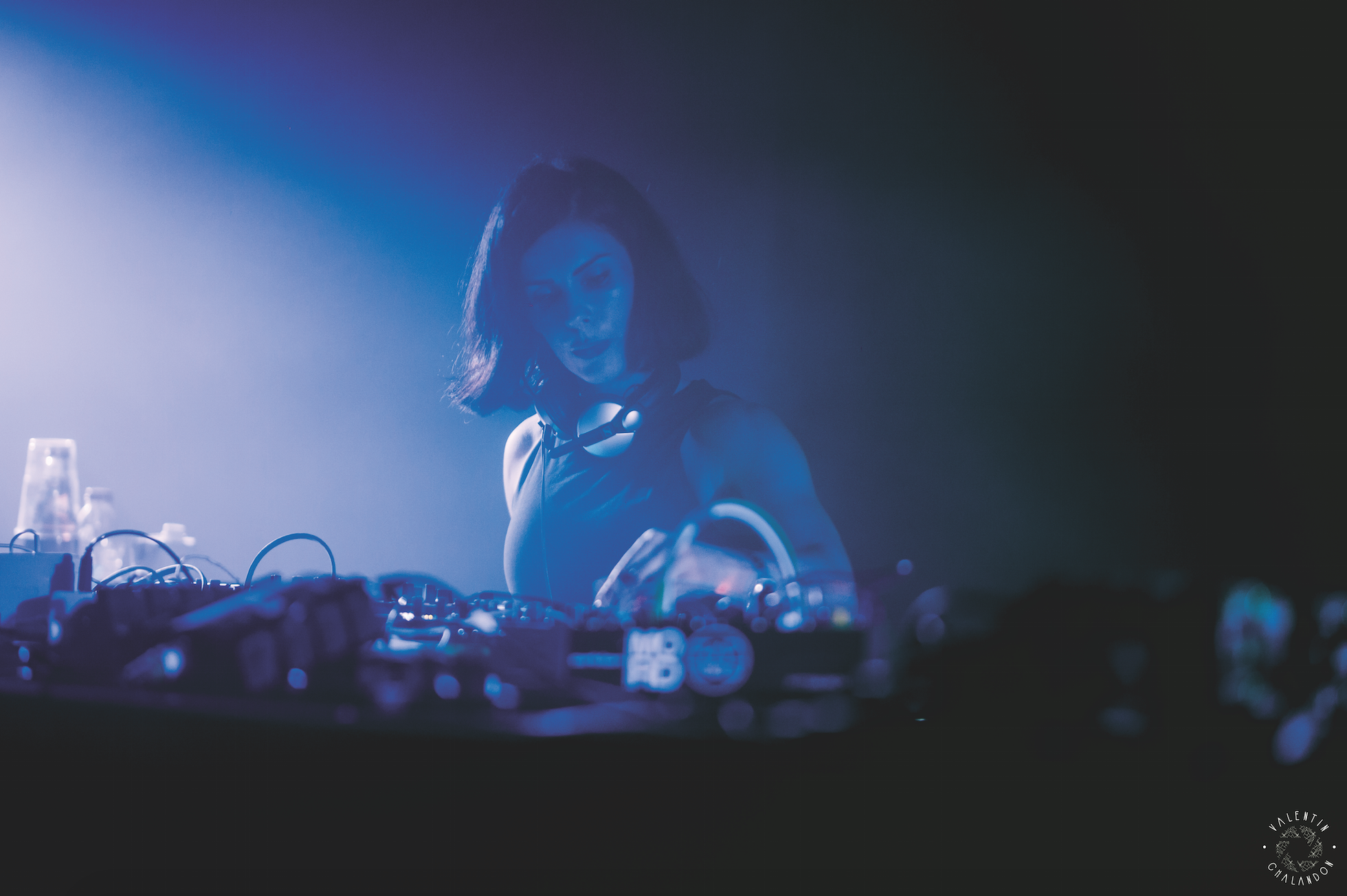