Moog Music is rolling out a new version of its Etherwave Theremin.

The new instrument is based on the original circuitry and aesthetic of Bob Moog's 1996 design and is described as “an update” to Moog’s highest-selling theremin models, Etherwave Standard and Etherwave Plus.

The new Etherwave Theremin promises to deliver "improved precision, portability, and playability for the professional thereminist or curious newcomer", according to Moog. It boasts improved bass response,  a quick-release mic stand adapter, CV output integration to connect to other synthesizers, and more features.

The first in the series profiles Herb Deutsch, a lesser-known figure but equally important to Bob Moog, whose name adorns the legendary synth company’s HQ in Asheville, NC.

Back in 2020, Moog Music released a new limited-edition theremin called the Claravox Centennial to mark the 100-year anniversary of the invention of the theremin, an instrument that’s played by moving your hands to control volume and pitch of a single sine wave tone. 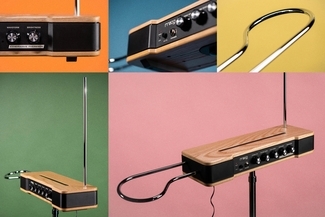