Detroit Swindle: How I Play Live

Detroit Swindle's live show has become renowned as one of the silkiest and funkiest electronic music live shows on the circuit. Growing from a simple Ableton-based sample setup, it's evolved into a full live band, which has seen the duo – along with producer and friend Lorenz Rhode – take their disco and house sound to theatres and venues as well as clubs.

At this year's ADE, Detroit Swindle LIVE with Lorenz Rhode will be taking the stage on Octover 20th at Claire alongside Eclair Fifi and Byron the Aquarius. Find out more from the event here. If you're thinking of taking your own show live, read some of our other How I Play Live features with Tiger & Woods and Henrik Schwarz.

Why was it important to you to develop a live show alongside DJing?
Maarten Smeets: “Our live show had a bit of a funny start. Back when we released our first few records, it was Peter [Gijselaers] who runs Dirt Crew who pushed us to do a live show. Lars [Dales] was immediately triggered to look into the nerdy part of the show and we both felt like it could become something special. Something different from a DJ show. The appeal of a live show for fans is obviously big, so I guess that’s why we went in headfirst. It’s one thing to hear someone play a record you really like, but it’s a whole different thing when that record is performed on stage. It suddenly comes to life and that’s a dimension of music you’ll never get when DJing."

How did you initially intend your setup to work?
“Our very first setup was super basic, running sequences from Ableton triggered by an Akai APC and drums done in Native Instruments' Maschine. We wanted to keep it simple, mostly because we were looking for a way to put a good performance on stage even though we both weren’t trained musicians. It was quite a foolproof setup, even though we did have a major breakdown mid-show once in Berlin, when our laptop crashed because it overheated. That was one set we’ll never forget. But you learn from that, and now, years later and countless versions of the show further, we know that hardware just sometimes breaks down. Devices have a mind of their own and you just have to deal with that.”

How has the setup changed over time?
“From that first setup on, we expanded with extra drum machines, external loopers, live percussion and some FX pedals and compressors to improve sound wise. At a certain point, we both felt like taking a new direction with the live show, and really focusing on live playing in more of a band setup. That’s when we got together with our friend Lorenz Rhode, who is a great keys player, to brainstorm about a possible setup with the three of us. We started rehearsing, and expanded the live show quite a bit into a setup where Lars would be running the main samples from Ableton, I would be sequencing the drums from the Elektron Analog Rhythm and Roland TR-8 along with a [Roland] RC-505 looper and live percussion like claves and cowbells, and Lorenz would do the chords and solos on a Prophet-6 and Fender Rhodes. The first show we did in this setup was at Dour festival. Coincidentally, Seven Davis Jr was playing the same stage and we had just done a remix for him, so we had him singing on stage as well during the show. That was super fun." 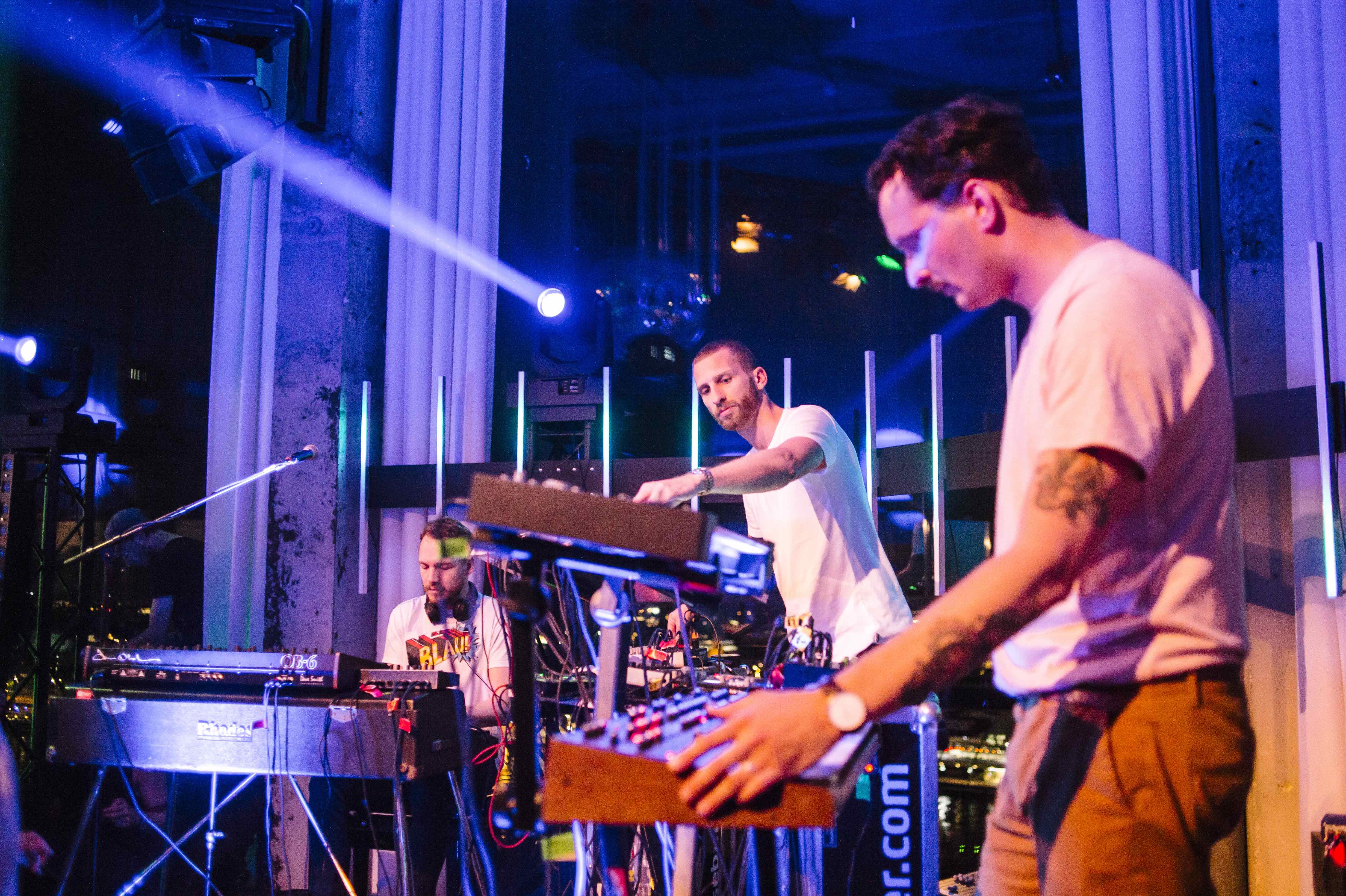 What’s your setup now and how does it work?
“Our setup now runs completely free of a computer, with the Dave Smith and Pioneer SP-16 sampler as the main source of loops. Lars controls the body of the live show from there and runs the drums from the Elektron Analog Rhythm. He has a Dave Smith Mopho for some baselines, a Roland MX-1 for mixing and sidechaining and a bunch of effect pedals like the Boss RE-20 and the EHX Space Drum. I play most of the pads and leads on the Prophet-6 and Elektron Analog Keys, and Lorenz plays the Rhodes and DSI OB-6, where he does lots of solos and basslines.

“We also run a light show with MIDI signals coming from our setup, where each track has its own vibe, character and pattern in the LED panels we each have behind us. It’s become quite a big live show and this year, we’ve played ‘concert’ shows for the first time. It felt really nice to take the live show out of a club context and set it up as an evening show. We have some more room to showcase the more ambient side of our latest album and you know that there’s full support from all the people in the crowd. They’re really there just for you.”

What are the main challenges in the setup as a whole?
“I would say travel and all the work surrounding a show is the biggest challenge. Musically and technically, we’ve got this thing worked out and we’ve done so many shows that we all really know how to play it best. The interaction between the three of us on stage is really good and it’s a fun show to play. It’s confronting though to realise, that if we’re on tour with this thing, it eats up all of your time. We travel with almost 200kgs of equipment in seven flight cases, set up and soundcheck takes up about two hours even if everything goes smoothly – which hardly ever happens unfortunately – so along with travel and a little bit of rest, that’s pretty much your full day. I would say that our challenge for the future is to deliver the same type of show, but somehow downgrade a little bit on the equipment. How and if that’s possible, I don’t know yet. Or we should just go for it, get a roadie involved, and make it even bigger. Time will tell…” 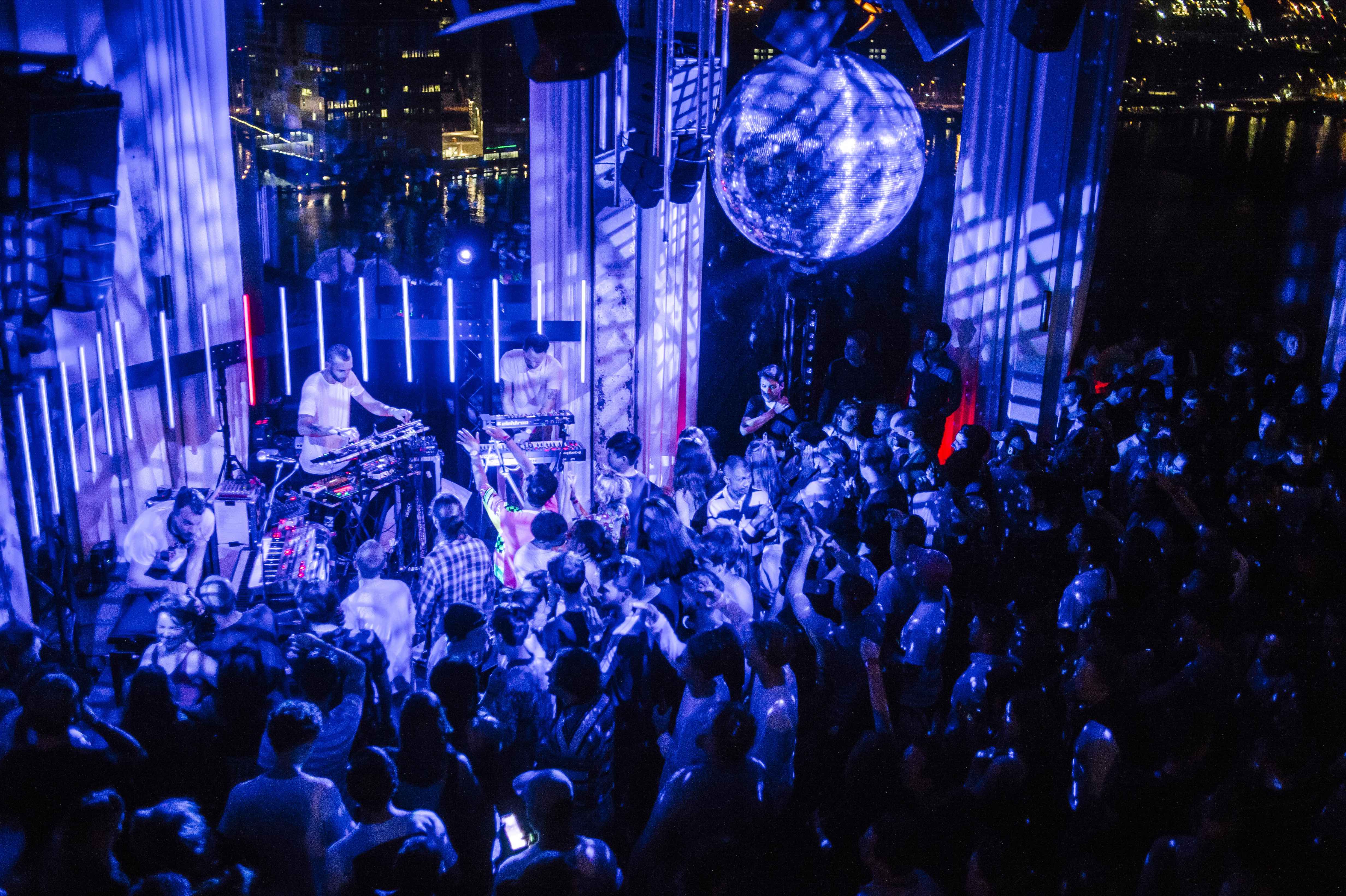 What advice would you give to someone who wants to take their music live?
“I think playing live is something that can really be fun, if you’re not too shy to make mistakes on stage and if ‘playing’ is something you really enjoy. If you’re not that kinda person, I wouldn’t suggest opting for live shows.  If you do it, my biggest advice is to find a setup that works for you. That means that you need to find the machines that you’re really comfortable with and you know inside out, and you set your gear up in such a way that the things that make your music special are emphasised. Also, don’t be afraid about stuff breaking down. It will happen. It happens to everyone. Just know your gear well enough to know how to respond to it."

"Live music is something dynamic, alive and vibrant, so it makes sense that there’s a growing interest in live electronic music"

What do you think is behind the current growing trend in live electronic music?
“I think there’s a trend towards musicality in the music scene. The rise of disco and African music and even the comeback of vocal and piano house are signs of diversification in what people want to hear. Live music by its very nature is something dynamic, alive, and vibrant, so it makes total sense that there’s a growing interest in live electronic music. It’s a trend I hope will carry on for a while and will encourage more people to explore the world of live music.”

How does playing live influence your DJ sets and vice versa?
“I guess I’d say we’ve played less of our own music when DJ’ing lately because of the many live shows we’ve done. The nice thing about having the two different types of shows is that it allows you to fully focus on the one show, and do something completely different with the other. It keeps things exciting. It’s also a funny thing that when we do play a track in a DJ set that we also play live, I’ve recently noticed that the live version has become the ‘real’ track for me, and the recorded track becomes more foreign, like something we made but is not quite the story we’ve been telling. During shows, we do quite some improvisation, and [if] we find something that really sticks, we incorporate it in our shows. If you play enough live shows with those improvs, the original track, or the way we recorded it, almost sounds like a different version of the track.”