Having found their musical feet playing in bands, it was a natural step for Mount Liberation Unlimited to take their new-found love for electronic music on the road in flight cases rather than USB ones. Their disco and house sound coupled with space-y warbled vocals and a lo-fi aesthetic combine to create winding and vivid records that bubble with personality. Their live show, as we found out, was a wild adventure in trial and error, one that continues to evolve along with the duos own ambitions. We caught up with them to find out how the show came together, the ethos behind the setup and what DJing can teach you about performing live…

What made you want to play live beyond just DJing?
"The way we entered the electronic music/dance scene was from a live-music background rather than a DJ one. We were just two guys that used to play in bands that started going to raves and got stuck in the dance. So our first approach to making electronic music was through the instruments we already knew rather than wanting to become DJs and play other people's music. Later on, when we started getting requests for gigs we weren’t really comfortable in playing records together yet, so the most natural and honest approach for us was to figure out a way of how to perform our own music live in a club environment. Now we’ve realised that the common starting point usually seems to be the other way around. That initial naïveté was and still is key to everything we do."

What were the biggest challenges in putting your live show together?
"First off, we had absolutely no idea of where to start! Like, if you want to start a band, maybe you go to a few shows and pretty soon you realise that drums, guitar and bass might be a good starting point. But it’s not like you go to a few rave parties and then figure out how to put together a live set. Everything was so alien, and no setup looks like the next one. It’s really an open field where you have to balance your artistry versus technological challenges." 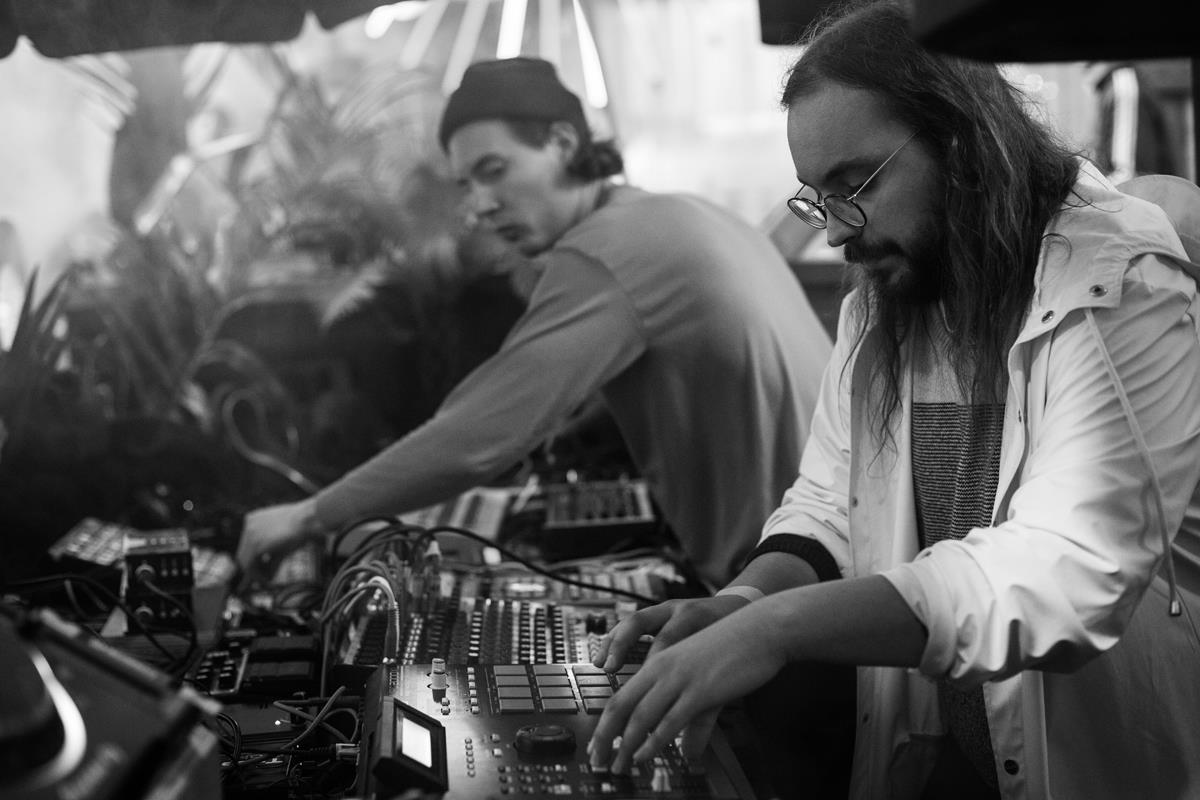 "Artistically, the biggest challenges that we’re still battling today is making electronic machines behave in organic ways, step away from the 16-step sequencer and loops, as well as sonically have your music compete with already-mastered and heavy limited music coming out through CDJs. On a personal level, it’s an important lesson to understand your role in the club as a performer, you need to mould yourself and your music to the room.

"Hopefully, with the rise of tech companies developing new kit today, it’s probably a bit easier to get started. Enter pretty much any music shop and you can come out with a techno-starter-pack that won’t break your wallet, and after a few YouTube tutorials you should be able to make them LEDs swing."

What does your setup consist of?
"Niklas is handling the MPC 1000/MPC 2000XL as main drummers, a Yamaha DTX drum pad for live drumming – which we also use a lot for MIDI looping – conga drums and a bunch of other hand-held percussion and a Moog Minitaur for bass. Tom does more of the harmonic stuff from a [Roland] Juno-106, sometimes a Korg PolySix. But due to the lack of fully functional pieces of these two synthesizers around the world we’ve just started to travel with a Behringer DeepMind 12. Tom also plays the guitar as well as vocals.

"All of this is sent to an analogue Allen & Heath mixing desk, with a bunch of send effects on the aux channels and a bus-style compressor on the master."

What would you change about your setup if you could?
"We’d love to play live with an acoustic drum kit and more full-size keyboards one day, but unfortunately we live and perform in a world where low budgets, max weight on flights and microphone feedback in nightclubs are a reality.

"Usually, we fly with cables and adaptors in our pockets because our 23kg bags are already so maxed out! Actually, that should be added to your question about challenges – travelling with a live set is always a god damn challenge."