ALOK has announced his debut Ibiza residency at Hï Ibiza.

The Brazilian DJ and producer, who recently made his debut at London’s Ministry of Sound club, has announced a nine-date takeover at Hï Ibiza this summer.

Taking place across four Mondays in July, three in August and three in September, the run marks ALOK's first residency on the White Isle, and sees the DJ joining the likes of The Martinez Brothers, Black Coffee and Glitterbox as the superclub's 2022 residents.

Speaking on the announcement, Alok said: “I’m so excited to finally announce my debut, headlining residency at no other than Hï Ibizathis Summer! As the first Brazilian to be headlining a main room super club on the island, it feels like the perfect time to celebrate and bring an amazing party for you guys across 9 exciting weeks – see you there!”

You can find out more information about the dates and purchase tickets via Hï Ibiza here. 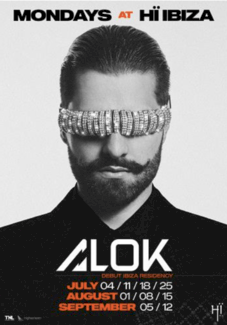