Armin van Buuren has unveiled the line-up for A State of Trance (ASOT) 2023.

More than 40 international acts are set to descend on the Netherlands to mark the 20th anniversary of the ASOT event. Among these are ARTBAT, Enrico Sangiuliano, Ferry Corsten, and Vini Vici. Armin van Buuren will play an extended six-hour set on the first day. Check out the full line-up below.

The ASOT 2023 Celebration Weekend is due to take place on the 3rd and 4th of March in the Jaarbeurs centre in Utrecht, returning after a three-year hiatus due to the pandemic.

Having revealed the line-up live during a special live broadcast of his ASOT radio show from the Our House Museum in Amsterdam, van Buuren also revealed a new brand identity for ASOT, complete with an updated logo and a new red-hued colour palette.

Find out more info about the event here. A limited number of tickets will go on sale on Saturday 21st January 11am CET via the ASOT site.

Buuren dropped his A State of Trance 2022 mix in December, the 19th entry in the long-running series, which features 109 tracks by the likes of Above & Beyond, Kryder, Ahmed Helmy, Ben Hemsley, Ferry Corsten, Hardwell, as well as van Buuren himself. 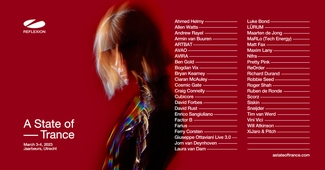