The album will mark the legendary English electronic band's first album since the the passing of  founding member Andy Fletcher. Now comprised of co-foundersDave Gahan and Martin Gore, the group's new release will arrive in Spring 2023.

Speaking about the album - the band's 15th full-length release to date - Gore said: “We started work on this project early in the pandemic, and its themes were directly inspired by that time. After Fletch’s passing, we decided to continue as we’re sure this is what he would have wanted, and that has really given the project an extra level of meaning.”

“Fletch would have loved this album," added Gahan.

To mark the release, which is the follow-up to 2017's 'Spirit', Depeche Mode will launch the North American leg of their 'Memento Mori' world tour in March 2023. From May, the European leg will take in shows including London's Twickenham Stadium on 17th June and Malahide Castle in Dublin on 14th June. Check out the full tour dates below.

Back in 2020, Depeche Mode were inducted into the Rock & Roll Hall of Fame. 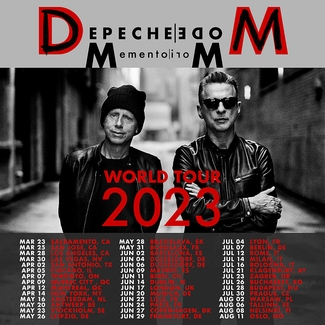