Mary J. Blige, WizKid and Kamasi Washington are among the names announced to play The Roots Picnic 2022.

Headlined, hosted and curated by hip-hop group The Roots, the music festival will take over Philadelphia's Mann at Fairmount Park across 4th-5th June. Set to be broadcast via YouTube, the festival - which returns for its first in-person event since 2019 - will also feature sets by the likes of Black Thought, Freddie Gibbs and Jazmine Sullivan.

Having recently performed as part of this year's Super Bowl half-time show alongside Dr. Dre, Eminem, and more, Mary J. Blige is billed to perform with The Roots. Check out the full line-up below.

"This year, Black Thought, Questlove, and I attempted to curate a lineup that broke through the genre barriers that often separate us in Black culture," said Shawn Gee, the president of Live Nation Urban, manager of The Roots, and co-founder of the Roots Picnic. "To be able to book Mickey Guyton, Kirk Franklin, G Herbo, Wizkid, Wallo & Gillie, and Mary J Blige on the same lineup was a dream come true.”

Tickets for The Roots Picnic 2022 are on sale now.

Questlove was nominated for an Oscar in the Documentary Feature category for his work on Summer Of Soul (...Or, When the Revolution Could Not Be Televised). 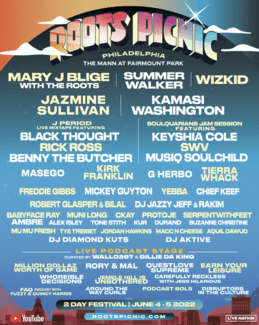