Portishead are set to make a rare live appearance in aid of Ukraine.

Portishead's last live performance was at the 2015 edition of Benicàssim. It came seven years after the band released their third studio album, 'Third'. Last year, they made their cover of ABBA's 'SOS' available to stream for charity.

In a statement, the band said: “We are really pleased to be able to support the people of Ukraine by performing a few songs at this event in collaboration with the amazing War Child charity.”

Tickets for the concert - which will also feature sets by the likes of Billy Nomates and Idles - are limited to 1,200, and will be raffled off in pairs. Raffle tickets cost £10 and each entrant will be sent a link to a high-quality live stream of the event.

Free entries can also be made by sending a postcard with the entrant’s name, address and email address in black or blue ink to the following address:

According to War Child, the UK government will match donations for the concert - which features artwork and merch by Massive Attack's Robert del Naja - with funding for the concurrent humanitarian crisis in Yemen.

Earlier this month, music collective eastbloc sound alliance released a compilation fundraising for Queer Ukrainian aid organisations. For more on how you can support Ukrainians affected by Russia's invasion of the country, check out this open source spreadsheet of Ukrainian musicians and record labels from whom you can buy music directly. It also includes link to humanitarian aid organisations. 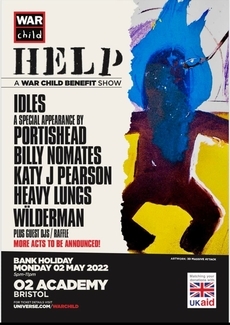