The Prodigy will go on tour this summer.

The iconic UK rave group announced today (7th March) that they’ll embark on a 10-date UK tour in July, culminating in three nights at Brixton Academy. The tour marks the group’s first live dates since the death of frontman Keith Flint in March 2019, and will correspond with the 25th anniversary of their third album, ‘The Fat of the Land’.

The tour will also feature dates in Sheffield, Liverpool, Leeds, Birmingham, Newcastle and Manchester. Check out full info on the tour dates below.

In a statement, The Prodigy’s Liam Howlett and Maxim dedicated the tour to Flint, and teased that there may be new music played at the shows. They wrote: ‘WE CANT WAIT TO GET BACK ONSTAGE AND PLAY OUR TUNES FOR THE PEOPLE AGAIN  ,  THE 25TH ANNIVERSARY OF ‘FAT OF THE LAND’  FELT LIKE THE RIGHT TIME FOR US TO STEP UP  ,  WE'LL BE DROPPIN TUNES FROM ALL OUR ALBUMS AND MAYBE SOME SHIT U HAVNT HEARD BEFORE. THIS ONE’S FOR FLINTY ,,,    NOW LETS FUKIN GO !!’

Last week, The Prodigy paid tribute to Flint on the third anniversary of his death. 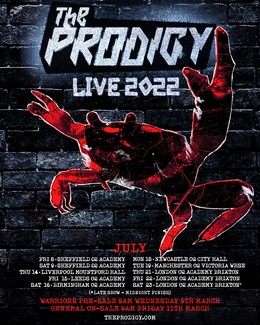 The Prodigy’s Maxim is releasing an NFT