It wouldn’t be a stretch to say Roland’s iconic instruments define the sound of house, techno, acid and electro. Their original TR range of drum machines remain the stuff of legend, specifically, the 808 and 909, both playing their part in changing the sound of music across the board and still remaining heavily in demand to this day. While the original units are still priced out of the hands of most producers, Roland’s AIRA range has done an excellent job of modernising the classic kit. Though there have been many clones, hardware and software, both the TR8 and the TR8S have been huge successes, reintroducing a familiar sound, while bringing the interface and connectivity into the 21st century.

While they may not be analogue, they make up for it with a healthy feature list, adding mod cons like USB connection, SD card slots for loading your own samples and FX straight on the unit. They still come at a price though, with the original 8 costing £399 and the 8S coming in at £609. Korg’s Volca series, on the other hand, provided a truly analogue experience for a fraction of the price, though lacked a lot of the features that handed the TR8 range rave reviews.

Enter the T8 — Roland’s middleman solution, offering a lower price point, portability and FX, while attempting to summon the energy of Roland’s classic beat machines. At $199 it’s very affordable, but what compromises does it make to reach that new price point? Let’s find out.

Both the TR8 and the TR8S have been huge successes, reintroducing a familiar sound, while bringing the interface and connectivity into the 21st century

Unboxing the T8, you first notice its size and weight. It’s small and light but doesn’t feel flimsy. If you have used the Korg Volcas, the knobs are pretty much identical, but there’s a lot more space between each controller if you struggled with bigger hands on the mini Volcas. The T8 combines both drum and bassline sounds and, though there’s a limited amount of sample choice, there are plenty of tweaking options which we’ll get to later.

At the bottom, there’s the expected 16-step sequencer, where you programme your drum and bass pattern and the majority of the knobs take care of shaping your sound. Connection-wise, there are four 3.5mm jacks for sync in and out and audio in and out, while around the back there’s a USB-C port for power and charging, and MIDI in and out 3.5mm jacks for an adaptor sold separately. The USB-C can also send audio, so you only need one cable for power, MIDI and audio out into your DAW. Very nice. Finally, there’s a seven-segment screen for changing settings and parameters. While other portables might rely on removable batteries, the T8 is rechargeable over USB, with 4.5-hours of use on a full charge — a very welcome addition.

Sound-wise, every part has a level control while the kick, snare, clap and tom have tune options and the closed and open hats share a decay knob. In fact, claps and toms also share level and tune, which is a shame given they are fairly different sounds compared to hats. The bass section has more options such as pitch, cutoff, decay, env mod and resonance. There’s also built-in reverb and delay that are applied to the master out.

Programming is pretty straightforward if you’ve ever used a sequencer — press the button of the sound you want and add it to the step sequencer to hear it as part of the pattern. You can also hit the record button and play your beat manually. Your recording will be quantised once the cycle comes back around. Each sequence is 32 steps long — use the Shift+F button to switch between the 1-16 and 16-32. The main Tempo/Value programming dial changes the bpm.

Given that the kick is the iconic sound on both the 808 and the 909 it’s worth starting with that. It sounds very good. Surprisingly good. It’s got the 909 punch and pitch envelope that gives it that classic house sound, but it’s also possible to dive into the menu and take some of the attack off if you’re more of an 808-type person, though it’s definitely more similar to a 909. It’s got a thick, punchy transient, but also a powerful low end, and uses the same Analog Circuit Behaviour (ACB) you’ll find on other Roland kit including the TR8S and TB-3. A good start.

While the kick only has one tone to choose from, the tom and clap can be changed between a few sounds, but to do this you need to dive into the menu which is a bit fiddly, as we explain later. It’d be better to do this from the front panel. The rest of the sounds are oscillator-powered toms, hats and snares rather than PCM samples.

Once you’ve got your beat rolling, it’s time to add some bass. There are two ways to create a bass pattern, either by turning the 16 steps into a chromatic keyboard by pressing the KYBD button and playing your riff while recording, or by programming steps similar to a beat and adjusting the pitch after by holding down the step and turning the Value knob. The bass is a simple saw or square wave, similar to the 303’s — the wave is switched in the menu — with the filter also designed with the same resonance response as the acid classic. It’s a simple synth but gives the T8 a lot more options, meaning you don’t need to add another machine to get the basics of a track rolling. It can also get very dirty and distorted with some tweaking. At this price point, it’s an impressive addition.

As we mentioned there’s also added FX in the form of delay and reverb. These are added to the master, but it sounds like there’s a filter up to around 100Hz, to prevent a build-up of low end that could make things muddy. You can change the reverb ‘size’ and the delay rate using the value knob. They’re basic but do the job.

Other features include a USB-C port for triggering sounds from your DAW via MIDI or syncing the sequencer to the bpm of your project, another handy and impressive feature at this price. There are a few other useful MIDI implementations like the ability to change the pattern remotely for live performances or for sequencing a recording across an arrangement.

So, the T8 is not just a pocket version of the TR8 range, it features a whole load of features you’d expect on machines with a much higher price tag and could even be capable of being your main drum machine and ideas generator if you’re tempted to get away from the laptop screen.

However, in doing so, you’re gonna make some sacrifices, namely the cryptic menu you’ll need to navigate when you first use the T8. There are a total of 43 different options all displayed through the seven-segment LED, meaning you get options like r.Scl, Lul.C and rLd.b, which you need to decode using the manual. To be fair, most of these are set-and-forget and it’s very unlikely you’ll need to tweak all 43, but you will need the manual alongside you for the first few days. Other frustrations include being unable to save sounds once you’re happy with them, and it doesn’t go to sleep if you leave it unused for a few hours, meaning if it’s accidentally left on, it’ll stay on until the battery dies. It would be nice to have a sleep function to save the charge.

Overall the T8 has a lot of functionality in a small box. Some of the features may require the menu to uncover, but there’s a heap of options for sequencing and variations under the hood. Given that it’s modelled on the 909, 808 and 303, it doesn’t do many other sounds, so don’t expect the full range of sampled drums here (also, no cowbell) — it’s very much a house and techno machine. But, for a first hardware drum machine, or for generating new ideas away from the DAW/adding some drums to your live show or DJ set, it’s a really powerful unit for $199. 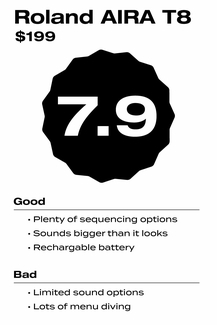