Kendrick Lamar has added a new teaser for his forthcoming album to his Oklama website.

A new link added to the page leads through to a black folder and a page called "master". On that page is a photograph of a hand holding both a book with Lamar's name and the album title 'Mr. Morale & The Big Steppers' on the cover, as well as two compact discs – one with "Morale" and the other with "Steppers" written on them, and each of them marked as a "master copy".

Last month, Lamar revealed the title of his new album, which is his fifth to date, as well as that it would be released on 13th May. He did so, as above, by tweeting a link to his Oklama website, which was first launched last August.

Speculation is now mounting that the new record will be a double album, due to the two CDs that appear in the latest image on the website. No tracklist or music from the record has yet been officially unveiled.

'Mr. Morale & The Big Steppers' follows the Pulitzer-winning 2017 LP 'Damn', and is Lamar's final project for Top Dawg Entertainment, his long-time label home. The US rapper is set to headline Milan Summer Festival next month. 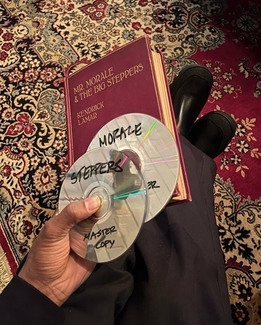