Phonox has announced details of its spring/summer programme.

Taking in debut appearances and return sets by both emerging and established names, the 550-capacity Brixton club will play host to the likes of Logic1000, Objekt, A Love From Outer Space, Move D, DBridge, Derrick Carter, John Talabot, Yung Singh, and Underground Resistance between late-March to June.

Each month will also host a Friday resident, with Nightmares on Wax playing weekly in April, Kasra and Critical Sound in May, Calibre and LTJ Bukem in June and EXIT Records in July.

The programme kicks off with object blue, TSVI and Or:la this Saturday, 26th March. A special guest TBA will also perform on 4th June.

Check out the full line-up below and dates here.

Opened in 2015 by XOYO and The Nest director Andy Peyton, Phonox has featured residencies by the likes of Palms Trax in recent times, as well as Saoirse and SHERELLE in January and February respectively. 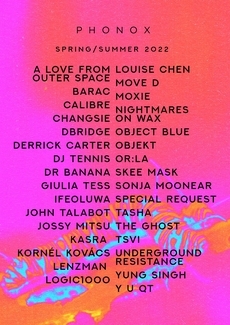