Movement Detroit has announced the full line-up for this year's festival, which returns to the city's iconic Hart Plaza on 28th, 29th, and 30th May 2022.

These names are all in addition to those already revealed last month, including the first back-to-back between UK drum & bass stalwarts Goldie and LTJ Bukem, Jeff Mills, Richie Hawtin, and Adam Beyer, among others. Tickets are on sale now, and the complete list of artists involved in this edition is below. 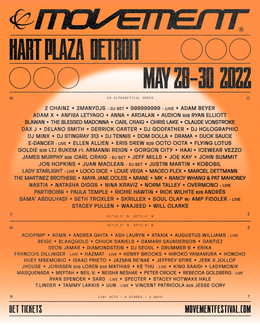